Osaka City University held its annual Boat Race on the Okawa River on Saturday 24 and Sunday 25 May. 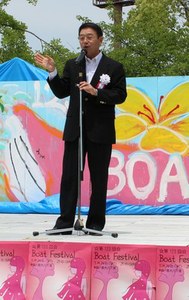 Under a sunny sky a parade of the OCU Marching Band and a live-art performance by the Art Club provided a spectacular opening.

After a speech by OCU President Nishizawa, the guest team of Board Members from Osaka Prefecture University, participating for the second year, was shown a warm welcome. This was followed by a speech by the Mr. Tsukamoto, Vice-Chairman of the OCU Education Supporters Association, which is the major sponsor making the annual boat race possible. After the speeches, the cheerleading group of OCU gave a great performance that made sure the boat race was off to an exciting start.

The first race featured the OCU President and Executive Directors, followed by races between teams of students, professors, staff members, alumni and Osaka citizens, with winners in nine categories.

Impression of the Boat Race