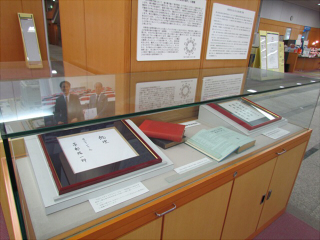 On the ground floor of the OCU Media Center you can now see the renewed display corner commemorating Professor Emeritus Yoichiro Nambu, who received the Nobel Prize in Physics in 2008. The display shows the message to the university written by Professor Nambu when he came back temporarily to Japan last December and study books with the original stamp of the 'Nambu Research Laboratory' that he was leading during his time at OCU.

Professor Nambu served as an Associate Professor at Faculty of Science and Engineering (Department of Physics) in 1949, when Osaka City University was founded. He became Professor in March 1950 and laid the foundation of the department.

Professor Nambu was awarded the Nobel Prize in Physics 2008 "for the discovery of the mechanism of spontaneous broken symmetry in subatomic physics".