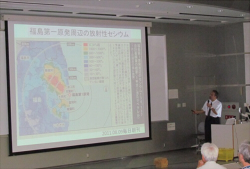 On 24 August OCU held an open lecture on the theme 'How to read Sievert and Becquerel values'. Since the Great East Japan Earthquake, OCU has been holding regular theme days with lectures to inform Osaka citizens about earthquakes and disaster prevention. On this 3rd theme day Professor Eiji Hirasawa of the OCU Graduate School of Science explained about the effects of radioactive material and radioactive pollution, a subject that has everybody's attention since the Fukushima nuclear accident.

Professor Hirasawa first explained about cesium, sievert and becquerel, terms often used in the media after the nuclear power plant accident. He explained the meaning of each term and also talked about the differences between easy to confuse words such as radioactivity and radiation, all in an understandable way. 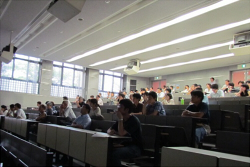 He then continued to tell about his own experiences when he was in Frankfurt in Germany at the time of the Chernobyl nuclear disaster in 1986. While showing pictures, he recalled how radioactive fallout reached Frankfurt, 1500 km west from Chernobyl, how nobody went into the parks anymore being afraid of radioactive pollution, the demonstrations that took place against the government's handling of the issue, people's reaction to the potentially contaminated food etc.

After that he explained about the mechanism of radioactive material, the effects of radiation on the human body and how we are always absorbing natural radiation from space, the ground and food in daily life. He then expressed his intention to contribute to the local community in this way again in the future, so people can get a correct understanding about radiation.