Each semester students from the department of Japanese Studies of the University of Hamburg (Germany) study at OCU for 6~12 months as part of a longstanding exchange program between the two universities.

Three new students started the exchange program last month and visited the Vice-President in charge of international affairs, Mr. Miyano, on 27 October. They did a self-introduction in Japanese and Mr. Miyano asked them about their study goals and impressions of Japan. At the end of the pleasant meeting the students received a commemorative Japanese lacquered photo frame.

During their stay the students will be following Japanese language classes, classes on modern Japan and they can attend classes in their own specific field of interest. They also plan to prepare for their thesis that awaits them next year back home.

The German students will be staying at OCU until the end of this academic year in March. 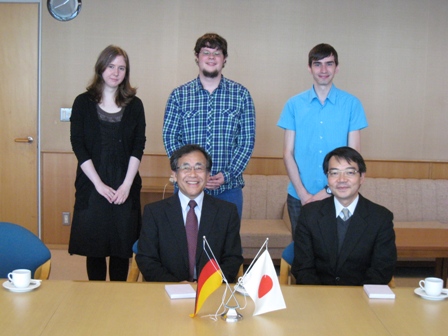