The courtesy visit proceeded in an amiable atmosphere. Consul General Thinh emphasized his expectations of increased cooperation between Japan and Vietnam, stating that the Consulate General will do its best to encourage new talent. President Nishizawa on this occasion expressed his hope to further develop exchanges between OCU and universities in Vietnam, a subject that was further explored during the meeting. 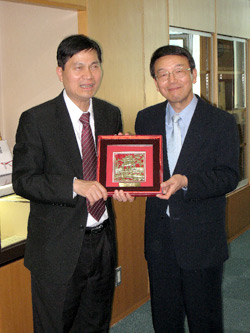