Each year Osaka City University (OCU) hosts students from the University of Hamburg under the academic exchange agreement established between the two universities.

Four new students from Hamburg arrived and started studying at OCU from April 2012. On 27 April 2012 they were welcomed by Vice-President of International Affairs Miyano. Each student did a self-introduction in Japanese and talked about their impressions of Japan, plans during their stay and the university club activities they already joined.

At OCU the students will follow Japanese language classes, classes on modern Japan and classes in their own specific field of interest. They will also start preparations for the thesis they will be writing after they return to Germany.

At the end of the meeting every student received a commemorative gift. 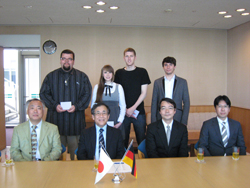