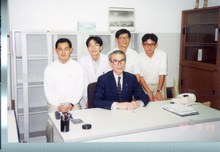 On the ground floor of the OCU Media Center you can currently see an exhibition on the years that Nobel Prize winner Dr. Yamanaka spent at Osaka City University.

Dr. Yamanaka obtained his doctoral degree from the Osaka City University Graduate School of Medicine. On exhibit are his doctoral thesis and photos of Dr. Yamanaka at his laboratory and on a field trip.

Dr. Yamanaka entered the Osaka City University Graduate School of Medicine, Department of Pharmacology in 1989. His admission interview initially did not go very well. At the end of the interview Dr. Yamanaka realized he would not pass and bluntly stated: 'I do not know anything about Pharmacology. But I really want to do research in this field. Please accept me!' It worked. He entered the Laboratory of Professor Yamamoto, with Dr. Miura as his direct supervisor. Although Dr. Yamanaka was eager to start carrying out experiments, Professor Miura told him to read lots of field literature first and carefully think about what he wanted to do. When Dr. Yamanaka read the research results of another Japanese graduate student who during his study identified the protein endothelin and was subsequently published in Nature magazine, he found a new goal and was finally ready to start doing experiments. Professor Miura helped him by proposing a hypothesis and showing him how to set about verifying it.

When he carried out the experiment, Dr. Yamanaka expected the hypothesis to be simply proven wrong or right, but in fact, he observed a completely unexpected result. That was the first moment he felt he was on his way to become a real researcher and it has served as an inspiration to him ever since. The result also surprised Professor Miura, who, although his student had proven his hypothesis to be wrong, urged him to find out more and to make it his graduate research subject. Three years later Dr. Yamanaka's thesis 'Putative mechanism of hypotensive action of platelet-activating factor in dogs' was published in the scientific journal 'Circulation Research'.

Dr. Yamanaka says he learnt these three things from this:

1. unexpected results are what makes science interesting
2. new medicines or treatments can have unexpected effects and need to be tested extensively
3. don't just accept what your teachers tell you as the truth, although they will also give you invaluable advice.

Words of congratulations to Dr. Yamanaka

■ OCU President Nishizawa:
'We send our sincere congratulations to Dr. Yamanaka on receiving the Nobel Prize in Physiology or Medicine. We are truly happy that the outstanding results of his many years of research have been internationally recognized and awarded with the Nobel Prize. In the footsteps of OCU Distinguished Professor Emeritus Nambu, who received the Nobel Prize in Physics in 2008, he will be a great inspiration to our promising young students and researchers. We hope for his continued success in his field.'

"Congratulations on receiving the Nobel Prize. Your research showing the possibility to reset already specialized cells has changed the medical field. I hope your continued research will make it possible to apply this method in medical treatments.

After Dr. Yamanaka presented his excellent in-vivo research results in the field of cardiovascular pharmacology and received his Doctorate in Medicine from the OCU Graduate School of Medicine in 1993, he moved to the Gladstone Institute of Cardiovascular Disease in the USA to do research under Professor Thomas L. Innerarity. For the first time using molecular biology techniques he did research on arteriosclerosis using genetically modified animals. That is probably the starting point of his work on embryonic stem cells. On 1 January 1996 Dr. Yamanaka became Research Fellow of the Japan Society for the Promotion of Science and came back to the OCU Faculty of Medicine, Department of Pharmacology in October 1996. Here he had to build up the research environment from scratch using his experience, ambition and strong work ethic from his time in the USA. He worked hard but found it difficult to fulfill his ambition and chose to become Associate Professor at the Nara Institute of Science & Technology in December 1999, starting out on a new road, with renewed energy.

I would sincerely like to thank him for showing our students that if you have ambition and work hard you can realize your dream in research and I hope that he will have continued success in this newly opened field of medicine."

"Congratulations on the Nobel Prize. The quality of his research does not need any saying, but I can say that also on a personal level, Dr. Yamanaka is an outstanding friend and researcher. I hope his research will be applied clinically in the very near future. Since the introduction of compulsory clinical training, the number of medical students that become researchers has been falling in recent years. I hope Dr. Yamanaka's achievement will again inspire students to do research, especially fundamental research.

There had been graduate students coming in from the surgical department before and Dr. Yamanaka became one of them. He was one of the last students to study under the former OCU President Professor Yamamoto. He started doing research to clarify the mechanism of cardiovascular action of platelet activating factors, a field closely related to mine. The research basically consisted of measuring components of blood samples obtained in experiments on the circulation of live animals. From the start his talent became clear. He was a fast learner and thought of an excellent way to verify our hypothesis, proved it wrong and then went on formulating and verifying new hypotheses. His doctoral thesis took some time and work to be approved, but in the meantime he did additional experiments, derived new research themes from his research results and was the lead author of 4 essays. I think he was good at managing several tasks simultaneously and was a very calm and likeable person. He was also a sportsman, practicing judo and rugby as a student. When he was in graduate school he would go running in Osaka Castle Park before coming to university and he competed in biathlons and triathlons. He was good at switching modes and instead of always working till late at night, he would go home on time, using his time well and efficiently.

After coming back from the USA he continued his research here, investigating NAT1 gene knockout, but due to embryonic lethality he did not succeed. I think most people would have given up at that point, but it has been his strength to improve himself and continue his work."