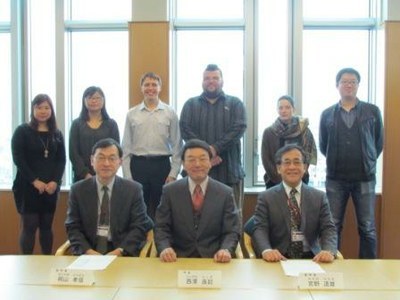 On Tuesday 5 February 2013 OCU President Nishizawa, Vice-President Kiriyama and Vice-President Miyano held an informal round-table discussion with international students currently studying at Osaka City University (OCU). The meeting was set up to hear the students’ reasons to study abroad, their impressions of the university and ideas for the future.

When asked about their reasons to study in Japan, Anton Mircha explained he had been interested in doing research on the subject of gender. He is now also doing research on work-life balance and looking forward to putting his research to use in society.

Hyoseung Bae had a senior who was an exchange student at OCU. She decided to apply after participating in lectures and workshops of an OCU professor who was visiting her university on an academic exchange project.

Li Sun had been interested in nutritional science from her high-school years. She wanted to study in Japan because it is advanced in this field, yet still in Asia. After hearing positive stories from OCU graduates around her she decided to enter the Food and Nutrition Course of the Graduate School of Human Life Science.

Dennis Düsenberg came to Japan on an exchange program of the University of Hamburg. Being offered the choice between Tokyo and Osaka, he chose to come to Osaka, feeling the atmosphere here would suit him best.

Shengdi Jin felt that the large size of the university would ensure a good educational level. He was impressed by the size when he first stood in front of the No. 1 Building for an exam.

Emilie Even came to OCU in October 2012, after being selected for a scholarship of the Japanese Ministry of Education, Culture, Sports, Science and Technology (MEXT). She entered the Graduate School of Science and is researching metals in river water. 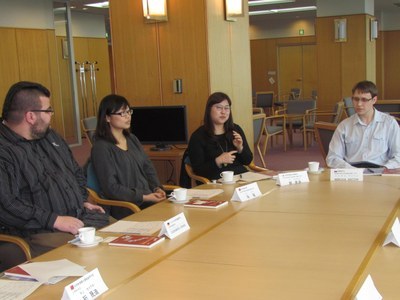 The conversation continued about their daily life, living circumstances and food during their stay in Japan. The high prices of fruit and vegetables brought the discussion on how to enjoy life in an expensive country like Japan and how to secure sufficient free time during your studies to get to know Japanese culture.

Studying in Japan can be quite challenging at times, but the students’ determination to keep their goal in mind, use their time well and overcome any kind of problem was very impressive. When their suggestions for the future were discussed, some students mentioned they had less contact with their Japanese fellow students than they had originally hoped. President Nishizawa said the university would do its best to create more opportunities for international and Japanese students to get to know each other, also beyond the individual faculties and graduate schools, and to strengthen support for international students so they can feel at ease and fully enjoy their student life.

President Nishizawa added that although a university merger is planned, much energy will continue to be put in the internationalization of academics and education. He expressed his hope that all students would become successful also back in their home countries and would always carry on contributing to international society.

At the end of the meeting a group photo was taken and all students had their copy of the book ‘History of Osaka City University’ (released on the occasion of the 130th anniversary of the university) signed by President Nishizawa.