On 9 July 2012 a delegation led by the Deputy Minister of Science and Technology of the Socialist Republic of Vietnam, Dr. Nghiem Vu Khai, visited Osaka City University (OCU) President Nishizawa.

Deputy Minister Khai is a graduate of the Osaka City University Graduate School of Science where he studied from 1988 until 1994. This time he visited his alma mater to discuss possibilities for cooperation and exchange between OCU and Vietnam and to learn about the current state of R&D at OCU and its industry-university cooperation.

On this very special occasion Professor Mitamura of the OCU Graduate School of Science Department of Geosciences and fellow student of the Deputy Minister at that time, Professor Raghavan of the Graduate School for Creative Cities, also attended the meeting. They both still maintain a friendly relationship with the Deputy Minister, who said he was happy to have this chance to visit his old university. 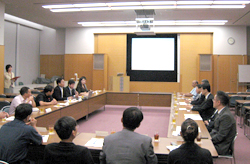 Photo of the meeting 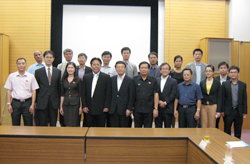