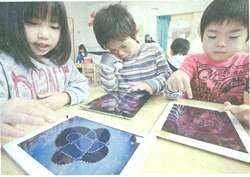 The ‘Region Select’ game that was developed by the research group of Professor Emeritus Akio Kawaguchi, using advanced mathematical theory, now has a children’s version.

The game can be played on ipad touchscreen tablets. Kids do not need any mathematical knowledge to play. Instead it lets kids use their intuition and fingers. At the moment the game is tried out by kids at kindergartens to monitor the educational effects.

The Yomiuri Newspaper wrote an article on the subject on 27 May 2013, on page 17 of its morning edition (title: A game to gain mathematical skills - Game software for children by Osaka City University Professor Emeritus - Knot theory lets flowers bloom on ipad).