Osaka City University celebrated its 135th anniversary with a special forum about the origin and future of the city of Osaka. The forum was the main event of the 135th anniversary year and was held at Grand Front Osaka Knowledge Capital on 18 December 2015, in collaboration with Nikkei Inc. A total of 350 participants attended to discuss ideas about the future of the city.

The forum was organized with the aim to re-establish the mission of the university, which since its establishment 135 years ago has  developed alongside the city of Osaka, and to consider how it can bring forward new views and ways to contribute to the future development of the city.

Before the forum started, the audience was treated to a fine performance by an ensemble of the Osaka City University Symphony Orchestra. President Yoshiki Nishizawa then delivered a word of welcome, followed by a keynote lecture by OCU alumnus Masahiro Sakane, former CEO and currently advisor at Komatsu. He spoke about the need to restructure Japan and Japanese businesses by reinvigorating their existing strengths. Many people in the audience were listening attentively and taking notes.

Next, University of Tokyo Professor Shunya Yoshimi spoke about the future of the university as an institute. He explained about the history of universities in Japan, differences with universities in the west, points of concern and a future in which people may enter university three times during their lifetime. 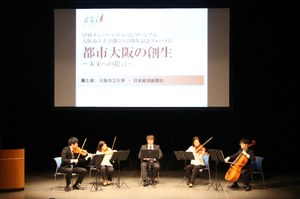 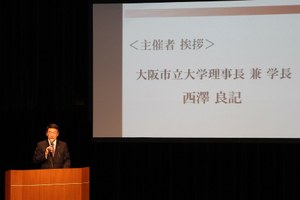 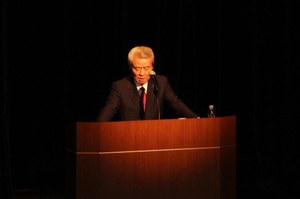 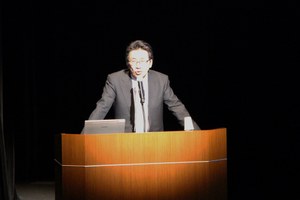 The keynote speeches were followed by a special interview of Takeo Higuchi, CEO of Daiwa House Industry, by OCU alumnus Kumi Fujisawa, co-founder of the SophiaBank think tank. Mr. Higuchi’s management philosophy and his character had the audience both laughing and completely captivated.

Last, Ms. Fujisawa led a panel discussion with five OCU professors (Prof. Kenkichi Nagao, Director of the Center for Health Science Innovation Yasuyoshi Watanabe, Extraordinary Prof. Masaka Nakao, Prof. Yotaro Suzuki and Associate Prof. Koichi Kana) about the future of the city Osaka. Each panelist, doing research on issues that the city Osaka is facing, discussed how their work will be developing in respect to the future of the city. 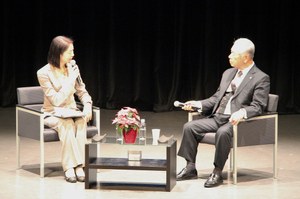 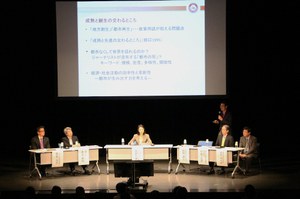 A full report of the forum will appear in the Nikkei Keizai newspaper in the last week of January.