“The 1st Japanese Speech Contest by Foreign Students in Three Universities” which is hosted by Kansai University, Osaka Prefecture University and Osaka City University was held at Umeda Campus in Kansai University on November 19, 2017. In the contest, 3 foreign students from each university delivered 5 minutes speech and compete with one another. Students take the initiative in carrying out the Japanese speech contest.

Before the contest, Mr. NP Kandel from Tomonokai Co.,Ltd. made a special talk “Three things that you must know before you start to work in Japanese company” with a real experience about a gap that he felt through a job in Japan.

Participated students delivered what they have noticed since they have come to Japan as foreign student and what is necessary to be active in the international community. Their stories illuminated their individual personality which made the audiences listen earnestly. Alifianto Adi Nugroho who come from Indonesia in OCU won silver prize and Ma Binbin who come from China in OCU is awarded bronze prize. Theodor Steiner who come from Germany in OCU received multicultural prize.

After the contest, a convivial party was held. The participants enjoyed the party very much

■“Provided things of culture exchange: From war to peace”

■“The reason that culture exchange should involve in over long periods” 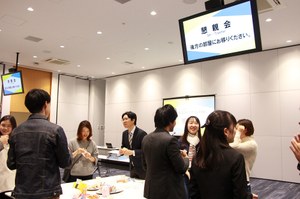 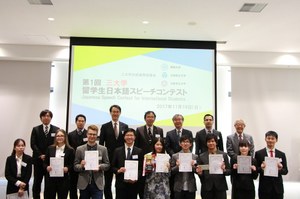