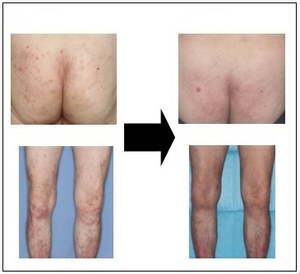 Researchers report the first case of a patient whose psoriasis improved when therapy for his hepatitis C virus (HCV) infection was initiated. Findings from a brief case report are published in Annals of Internal Medicine.

Researchers at Osaka City University, Osaka, Japan, report the case of an 80-year old man with untreated HCV and a 9-year history of unmanageable psoriasis, whose symptoms and signs persisted even after topical therapy was replaced with betamethasone and the vitamin D3 analogue calcipotriol. Since the patient's HCV had not previously been treated, the researchers initiated a 12-week course of oral, fixed-dose ledipasvir–sofosbuvir to address the HCV infection.

The HCV RNA level was 6.5 log10 IU/mL when treatment was initiated, but decreased rapidly after ledipasvir–sofosbuvir therapy began. HCV became undetectable on polymerase chain reaction testing by week 4, and remained undetectable for 24 weeks after therapy was completed. In addition, shortly after ledipasvir–sofosbuvir therapy began, the patient's psoriasis skin lesions started to resolve gradually, as well. The researchers believe this case is the first to show improvement of psoriasis when therapy with a direct-acting antiviral drug was initiated.