For two weeks from 28 June, four students of Associate Professor Akihiro Kubo’s seminar, Faculty of Economics, participated in the “Community Service Program” organized by Andalas University, Indonesia, the university which OCU has an academic exchange agreement with. They stayed in a village in Sumatra, Indonesia with local students to engage in solving trash problems in the mountain village.

Every year 4,000-5,000 students at Andalas University stay in an outlying village for about a month to participate in the program for solving problems in the village through a volunteer activity called the “Community Service Program”. OCU students became the first Japanese to participate in this program.

At the kickoff ceremony the OCU students, as the very first Japanese to participate in this program, received a great cheer before they and local students headed off to the village which was located seven hours away from the campus.

Although having been in an environment with electricity but no shower as well as struggling with linguistic and cultural differences, thanks to kindness of the local people including the village chief and the Indonesian students in the same group, our students strived to solve trash problems in the village for two weeks.

By making a poster with a slogan “Put the garbage in the trash can” they also tried to re-form consciousness of the people living in the village where littering is routinely accepted.

This is not the issue that can be solved in two weeks but the students who took part in this program showed their will to continue their effort to address environmental problems in Japan as well as in this village. 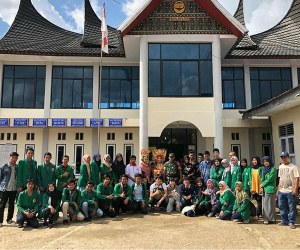 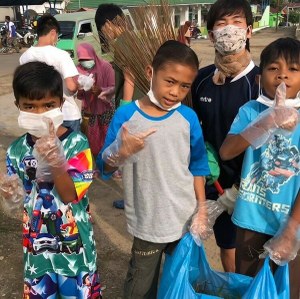