This festival first held in 1972, has been co-hosted by Osaka City University (OCU) Education Supporters Association and Global Exchange Office since 2007 and celebrated its 52nd anniversary this year. It has been operated voluntarily by students and welcomed by both international and Japanese students. The total of 119 students, faculty and staff joined in this time.

The reception dinner started with the toast by Professor Minami, Head of International Exchange Committee, OCU Education Supporters Association. International students, Japanese students, faculty and staff were intermingled and deepen their exchanges in a peaceful atmosphere through introducing themselves, games and talks.

The event reached the climax when President Arakawa descended the stairs of the foyer singing the Beatles’ “Yesterday” accompanied by the acoustic guitar. All the participants applauded him and the event was successfully over. 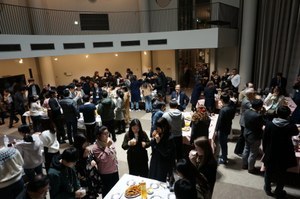