Japanese university students including four from Osaka City University (OCU), visited Seoul, Korea to participate in an international student exchange event for three days from 30 August 2019. Continuing from last year, OCU participated in this event which was part of the Japan-Korea University Students Future Forum. After arriving in Korea, the party visited Jungmyeongjeon Hall and Deoksugung Palace in the area where the royal palaces and imperial mausoleums are lined up and walked around the Chongdong street where brick buildings are standing in a row. At the Chongdong Theater they watched a silent drama (with subtitles) on a historical theme incorporating traditional dance and folk performing arts.

The joint discussion which was the main part of the program, was held at the Centennial Hall, Sookmyung Women’s University. Since 2019 is the milestone of the 30th anniversary of Shitennoji Wasso, Osaka, as well as the 100th anniversary of the March First Movement, Korea, the discussion theme was set for the purpose of entrusting the younger generation with the next 100 years through bilateral dialogue and collaboration.

Prior to the discussion, Professor Emeritus Seo Hyun-seop of University of Nagasaki who also served ambassadors of different countries as a diplomat as well as taught at University of Nagasaki as a professor, gave a lecture on history of bilateral exchanges between the two countries. In response to his lecture, the students were divided into groups and heated discussion took place. Facing the issues of environment, trade and human rights, which are difficult to solve by a country by itself as well as recent deterioration between the two countries, first of all they spent much time to search for the common ground and shared various opinions.

Amongst both Japanese and Korean students who participated in this discussion, some have roots in each other's country, understand both cultures by studying abroad in each other's country. They argued how they should establish their identity, spread diverse culture and they expanded their argumentation range to ideal education.

They will continue their discussion in Kyoto in November to search for concrete ways to create a new relationship over the issues raised in this discussion. On the final day, they joined in the festival, an exchange event, held in downtown Seoul, promising reunion in two months. 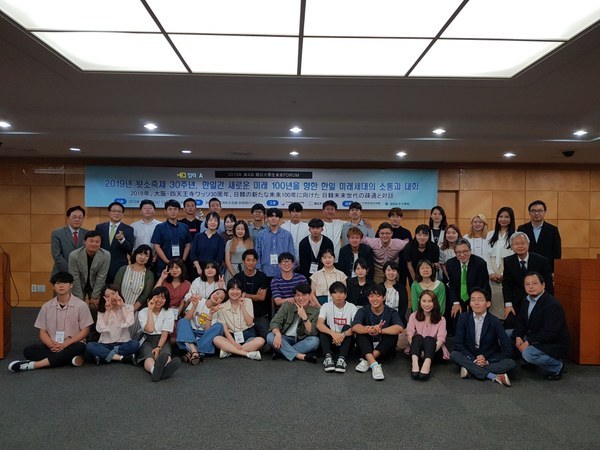