Osaka City University (OCU) has been studying evacuation plans in cooperation with the Tsunami Countermeasures Working Group in Osaka City since 2017.

Due to the tsunami damage caused by the Nankai Trough Megathrust Earthquakes, as the five gulf wards including Konohana-ku, Minato-ku, Taisho-ku, Nishiyodogawa-ku and Suminoe-ku are assumed to be flooded, it is necessary to secure evacuation facilities outside of tsunami flood prone area beyond administrative districts, and activities for evacuation behavior plans have been promoting.

This training was conducted on the assumption of residents evacuating to the elementary school and then performing the secondary evacuation to Osaka Castle Park, and reproduced evacuation behavior every hour on the map. Researchers and city officials discussed through repeated trial and error to find the most appropriate evacuation behavior.

A desk-top training drill on the map for the entire five gulf wards are scheduled in early September. 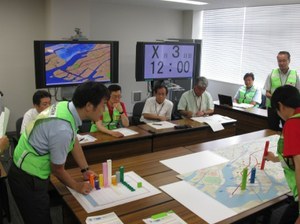 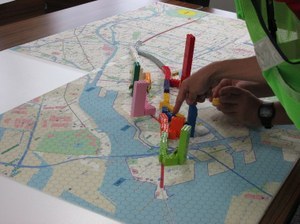 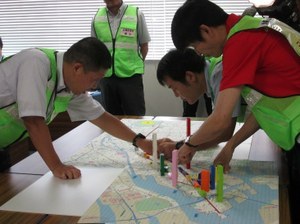 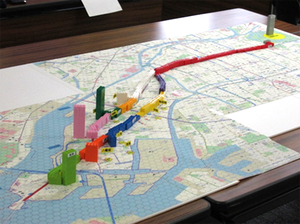