Mr. Kang Min Jae from the Department of Earth & Marine Sciences, Jeju National University, currently studying as an exchange student at Osaka City University in the Department of Geosciences, Faculty of Science, had an opportunity to guest teach at two high schools in Sakai City, first at Mikunigaoka High School on Thursday 14 November, 2019, and then at Sakai Kami High School.

Organized by the Sakai City Student Exchange Executive Committee, this program gives international students the opportunity to visit Japanese high schools and, together with the students, deepen each other’s understanding of school life and culture in Japan and abroad. 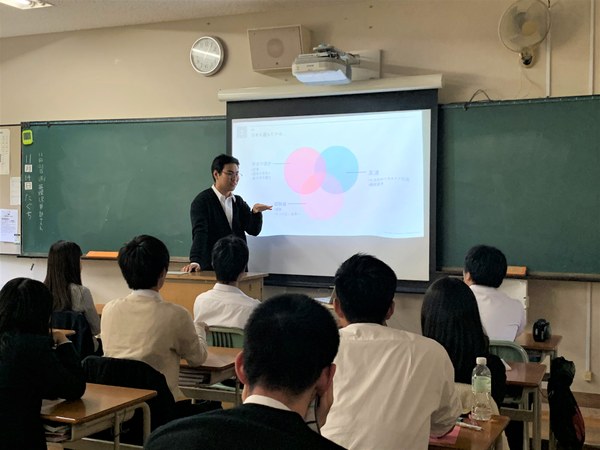 Mr. Kang traces his interest in Japan back to 3 different things:
1. He was influenced by one of his friends who was an “anime otaku” (animation geek).
2. He wanted to have more experiences with a different culture. (Mr. Kang became familiar with Japan when he visited once in middle school and once in high school as a boy scout.)
3. He wanted to study geology at OCU. Mr. Kang has liked dinosaurs since childhood and often went to natural history museums with his parents. Through these experiences he naturally became interested in paleontology to geology. When the Great East Japan Earthquake struck Japan, he investigated the science behind predicting earthquakes. He found out that Japan, an earthquake-prone country, is famous for research in the field and decided to study in Japan as an exchange student.

The lesson he shared with the students focused on the differences in clothing, food, housing and finance between Japan and Korea. 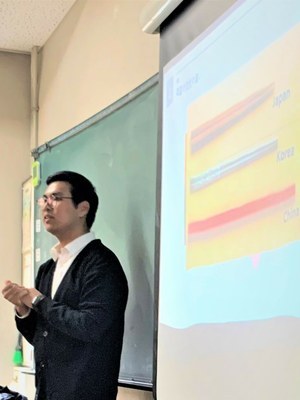 With “clothing”, he talked various Korean fashion trends, including the stylish Gangnam trends and the sporty Hongdae style. With “food”, He showed how Japan and Korea differ in length of chopsticks. In “housing” he introduced the unique way Korean housing designs deal with the severely cold winter. In “finance”, he showed how Korea has already become a cashless society.

Students were most interested when he used the romance styles of Korea and Japan as an example of cultural differences.

After it was all said and done, he mentioned how great an opportunity it was for him to introduce his culture as there were many students who did not know much about their neighboring country.