Now in its 54th season, this festival started in 1972 and has been co-hosted by Osaka City University (OCU) Education Supporters Association and Global Exchange Office since 2007. It is run entirely by student volunteers and welcomes both international and Japanese students. A total of 119 students, faculty and staff joined in this time around.

Mr. Akira Kojima, an OCU Global Member (OGM), served as the English MC for the evening. President Arakawa’s opening address was followed by the former OGM chairperson Ms. Yumi Murakami’s introduction of OGM’s activities for the year. OGM hosts various international events involving exchanges with international students throughout the year. Later, activities of the International Students Association in 2019 were reported by the former chairperson Ms. Ashleigh Pencil. She encouraged other international students to participate in the upcoming events. 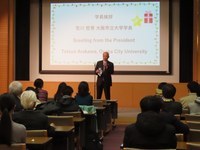 This event, also serving as the official welcome to the new chairpersons of OGM and International Students Association, saw Professor Daisuke Tsuruta, Specially-appointed Vice President, OCU/Director, Global Exchange Office present letters of appreciation to the former chairpersons and business cards to the new ones.

Afterwards, everyone moved to the researcher’s communication hall where dinner was ushered in with a toast by Education Supporters Association/Global Exchange Committee chairperson Shigeyuki Minami. International and Japanese students, as well as staff members all thoroughly enjoyed each other’s company. The event ended with the new OGM chairperson talking about plans for upcoming activities. 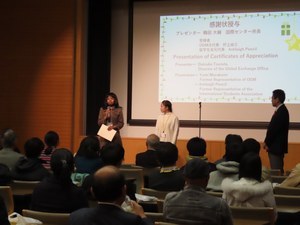 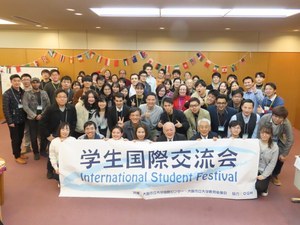