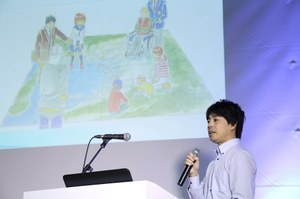 As a result, this application was given the Disaster Reduction Award in the Geo Activity Contest of the Geospatial EXPO 2019 hosted by Geospatial Information Authority of Japan (GSI) from 28 November to 30 November 2019. 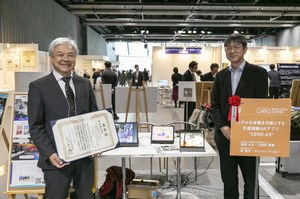 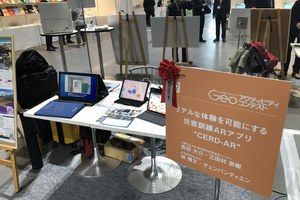 OCU CERD developed the application for smart devices (iOS) that have AR displays of virtual disasters such as fires and floods as well as the locations of disaster relief facilities. It was published as open source in 2017. (Press release “AR application for disaster education released as open source software” on 6 January 2017 in Japanese.) This application prepares users for actual disasters in an unprecedented way-by adding animations of the actual risks present in a target area. An AR application that overlays animations of disasters on what the user is seeing in real-time, partnered with visual locations of the nearest disaster relief facility, “gamifies” the disaster prevention drill with realistic sensations that will take the user one step closer to acting correctly in the event of an actual disaster.

AR Animation of a flood with rain

Also, map data available on the GSI website can be seamlessly overlaid on the CERD-AR application. This gives users a more intuitive understanding of disaster risks by showing them what kind of disasters are prevalent in the target area and specific areas that are more prone to said disasters.

Land-use map in the AR display

Superiority of the CERD-AR application

There have already been applications for smart devices with AR displays of map data, however, their availability is restricted to certain areas. This is due to the closed-source nature of the code used to develop the application – an application used in one area cannot be adapted to another area. The AR application developed by OCU is released as open source, thus it can be freely customized to any region or application.

Another unique feature which cannot be found in other applications is the format in which map data is displayed. The CERD-AR application uses a XYZ tile format that has been adopted by GSI and is the standard used by most government agencies and research institutes. With the CERD-AR application it is possible to display AR not only on existing data which has been distributed by government agencies and research institutes but also on map data created independently.

The application developed through this research has been available since Friday 6 January 2017 with an open-source license so that it can be widely utilized in various regions.

◆Application source code/Website where the document is available (Japanese only): https://bitbucket.org/nro2dai/cerd-ar/

Experimental usages of the application

On Saturday 17 November 2019 the CERD-AR application was used by parents and children at an event called “Strolling around town to experience AR”. Participants, as they walked around the Suminoe ward where they lived, listened to an expert talk about what kind of disasters they were at risk of experiencing while they actually saw an animation of the disaster transpire before them on their tablet devices via the CERD-AR application. Disasters they experienced included a tsunami caused by an earthquake along the Nankai fault line, flooding of the Yamato River, fires in densely populated wooden houses, collapse of block walls, etc.

They were asked to evacuate to learn what to do if a river actually overflowed, participants used the app to locate a water disaster relief facility and then physically went there. According to a questionnaire conducted after the drill, it was found that the CERD-AR application was quite effective.

Another example of using the CERD-AR application was an earthquake and tsunami disaster drill that took place on 8 November 2017. A timer was set on the CERD-AR application to trigger a series of virtual disasters such as tsunami, fire and collapsing of buildings and 180 staff working at the Kansai International Airport conducted an evacuation drill under these ultra-realistic settings.

A child experiencing a disaster with the
CERD-AR application

Participants experiencing a disaster with the
CERD-AR application 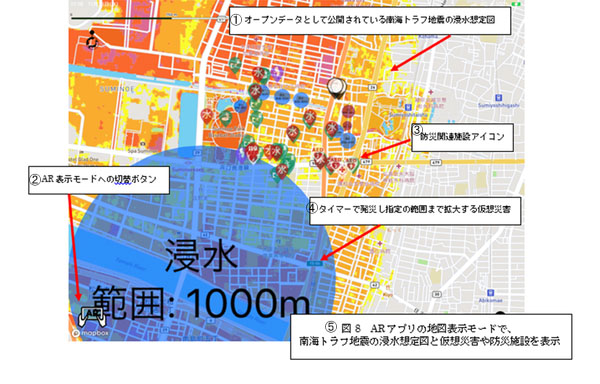 This application will not only be used during walks with Japanese communities, walks with foreign communities are also scheduled next year. The following improvements are planned to enhance the display performance for more realism:

This application was developed with the following financial support: