Professor Makoto Tsubota, Graduate School of Science, received the 2019 Fluid Science Research Award on Thursday, November 7, 2019. This award is given to researchers who have made great contributions to the field of fluid science through innovative research. Professor Tsubota was awarded for his research on quantum hydrodynamics and quantum turbulence”. 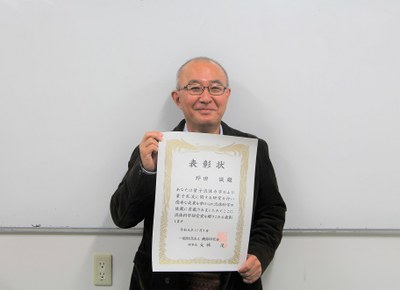 Professor Tsubota’s main research theme is “low temperature physics”. An important aspect of low temperature physics is turbulent flow. Currents around us, such as air infiltration in buildings and the flow of air around moving cars, are mostly turbulent, but their mechanisms are not known. There is something called a quantum vortex which is created by quantum fluids in low temperature physics and the turbulence generated from these vortices is called quantum turbulence. Professor Tsubota, who has conducted theoretical and empirical research on quantum fluids and quantum turbulence in order to elucidate their origin, has accumulated many achievements, and is a well known researcher in the field throughout Japan.

・”Leonardo da Vinci’s speculation has been verified! Unique structure of quantum turbulence has been discovered”  Published 10 April, 2019
・”incomprehensible movement of fine particles in superfluid helium occurring near absolute zero was proved to be manipulated by invisible quantum vortex” Published 8 May, 2019
・”Successful to measure energy transport for the first time in Bose-Einstein condensed quantum fluid of near absolute zero and observed the universal law of turbulence” Published 4 October, 2019

Past winners of the Fluid Science Research Award mostly had engineering backgrounds, thus a winner from the science department meant a lot. Professor Tsubota commented, “I am very pleased that my basic research thus far has been so highly regarded. I will be very happy if my research brings more recognition to quantum turbulence in Japan.”