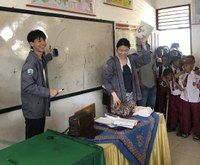 The program in which they participated is called “Community Service Program※１” . They stayed in a small village named Manggopho in Sumatra island together with the students from Andalas University to do volunteer activities. They played a role as temporary teachers at the elementary school in Manggopho and taught the efficient way of learning mathematics to the children under the cooperation of the villagers including the mayor and the officers. They said they were surprised at the remarkable growth of the children while they were teaching. Though their stay in the village was only two weeks, they deepened with the local students, children and villagers.

Mr. Okuda says, “I was surprised at many things in Indonesia. Islamic culture and the developing condition in Indonesia were quite different from what I had ever imagined. The most impressive thing I realized was that the way of thinking and behaviors of the Indonesian university students were almost the same as ours. I could have a good opportunity to reconsider my way of thinking and values through theses experiences.

Ms. Hibino says, “The life here with Andalas University students and full of Indonesian culture was very exciting and satisfied. This experience became my treasure.”.