“2020 is the year of the rat, the beginning of the 12 zodiac signs. This is an important year celebrating the 140th anniversary since Tomoatsu Godai and others established Osaka City Commercial Training Institute in 1880, which later became Osaka City University.”, said President Arakawa as he opened his New Year Greeting on January 6th, 2020.

He continued by saying that the largest public university scheduled to open with Osaka Prefecture University in 2022 is going to build its new campus in Morinomiya. As part of the concept behind the new university, the Osaka Joto area community development committee was formed and held their 1st meeting at the end of last year.

“I am pleased that the government and the private sector are working together to revitalize the Joto area starting with the new campus. I am convinced that the future for the new university is very bright.”, said President Arakawa.

He ended with his favorite new year’s riddle. 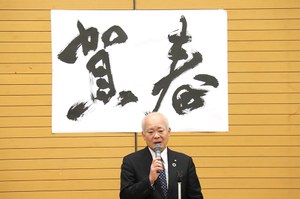 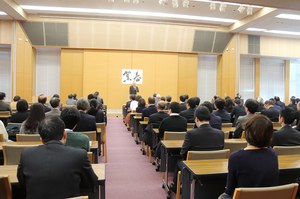