Associate Professor Kohei Saito of the Graduate School of Economics has received the 17th Japan Society for the Promotion of Science (JSPS) Prize for FY 2020.

The Japan Society for the Promotion of Science (JSPS) established this prize in 2004 to honor young researchers from an early stage with outstanding research ability and creativity, to motivate them to continue their research, and to help academic research in Japan reach top levels in the world. The award is given to young researchers under the age of 45 who have achieved outstanding academic results in the form of papers, books, and other research achievements published in domestic and international journals in all fields of humanities, social sciences, and natural sciences.

Associate Professor Saito received the award for his work on "An Ecological Turn in Marxian Economics)". (Click here for details of his research in Japanese)

Since the award ceremony was not held this year in consideration of the situation surrounding COVID-19, Associate Professor Saito presented his award to President Arakawa on March 23. Prof. Saito said, "In today's society, the problems that Marx was aware of in his later years, such as the environment and the contradictions of capitalism, are becoming more serious. I would like to engage in research while learning a lot from Marx, who can be regarded as a giant of knowledge".

This was followed by a roundtable discussion with Vice President Yotaro Suzuki and Professor Mitsumasa Koyanagi of the Graduate School of Science who received the JSPS Prize in 2017.

The discussion included a talk about Professor Saito's book "Capitalism in the Anthropocene" published last fall, Professor Koyanagi's latest research (Feeling  light other than with your eyes!), episodes from the JSPS award ceremony, and the students of Osaka City University - past and present.

Prof. Koyanagi said, "This award is an 'encouragement award' given to young researchers. I really felt encouraged by it. From now on, I would like to be in a position that gets the younger students I take in ready for this award."

In closing, President Arakawa said, "Our university has produced many ambitious people. I am proud that two professors, one from the social sciences and the other from the natural sciences, have received this award. I hope that our younger colleagues will follow in their footsteps." 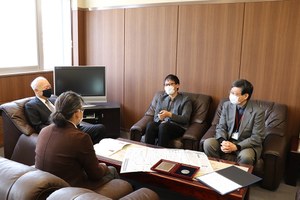 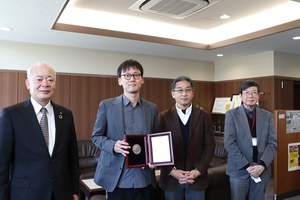 Four intellectuals chatting away             Everyone lined up in support 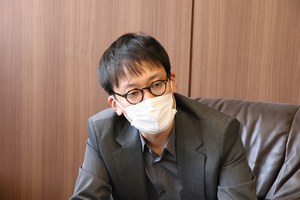 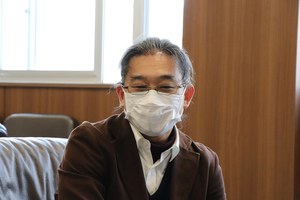 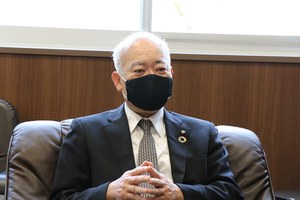 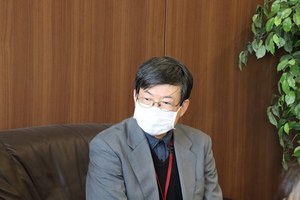