Prof. Akihiro Odanaka, together with Prof. Masami Iwai of Meijo University, co-authored a book discussing eight major works of Bunraku performed in Osaka during the 18th century from a new perspective of their political implications. The English writing was all done by Prof. Odanaka and it has become an effective book at spreading "Bunraku" and "Osaka" to readers in the broader world.

The authors were approached by an editor at Routledge who was interested in an abstract of a presentation they gave at the IFTR (International Federation for Theatre Research) conference held in Belgrade in 2018. 2 years later the book was completed. Routledge is a leading British publisher specializing in academic books, journals and online resources in the fields of humanities and social science, and it is very rare for humanities researchers in Japan to publish a book with them.

"Jidaimono", different from historical plays in Western theatre, has a unique structure of mixing past events with contemporary mannerisms; as a result, the samurais and the nobles in the past live on stage with the 18th century common people who are assigned the roles of their subordinates. Such devices invited the audience to interpret the dramatic events, which were often disguised as a criticism of the real politics, through their own eyes.

For example, in chapter 7 the book addresses the play "Ō mi Genji Senjin Yakata"(The Genji Vanguard in Ōmi Province) and its sequel "Kamakura Sandaiki" (The Three Generations of Kamakura). While the plays are set in the 13th century, it is virtually a protest against the regime established by the Tokugawa ruling class. While Osaka was a national commercial center with refined culture like bunraku, the city and its people were obliged to follow directions coming from the capital, Edo (which is known today as Tokyo). The plays thus raise up the indomitable spirit of the Osaka people who claimed independence from authoritative power. 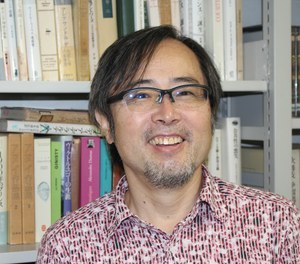 In writing this book, I felt indebted to the preceding studies made at OCU; in fact, OCU researchers have greatly contributed not only to a better understanding of bunraku, but also to the urban studies of the city of Osaka - including the problem of social discrimination. At the same time, I and Prof. Iwai debuted on the global scene through this book. We are curious to know how it will be received by English readers. In the meantime, we already have in mind the themes of the second and third books we intend to write in English.

1. The Dramaturgy of Bunraku 2. The Battles of Coxinga: The Self-image of Early Modern Japan 3. A Courtly Mirror of Ashiya Dōman: the Echoes of a Shadowy Domain 4. Sugawara and the Secrets of Calligraphy: The Emperor and the Stability of Society 5. Yoshitsune and the Thousand Cherry Trees: Re-appropriating History 6. The Treasury of Loyal Retainers: Money Can Buy You Loyalty 7. The Genji Vanguard in Ōmi Province: The Osaka People are Indomitable! 8. Mount Imo and Mount Se: Precepts for Women: Eros and Politics 9. Travel Game while Crossing Iga: Individuality on the Margin of Society