Osaka City University is pleased to announce that "Kameichi (full name: Kameichi Sugimoto)" (pending application for trademark registration) is born as the official character of the Sugimoto campus to celebrate our 140th anniversary.

This project was planned last year by 10 students from the “Culture and Representation Seminar II” by Professor Mayumi Sugawara of the Faculty of Literature and Human Sciences. They will continue to create additional Kameichi products this year.

In 2022, Osaka City University and Osaka Prefectural University, which have led the great city of Osaka, will merge to form the University of Osaka (tentative name). Kameichi will appear in various places, introduce activities and disseminate information in his path to be loved by many and become a symbol of the Sugimoto campus. Please look forward to his appearances in the future.

Name: Kameichi Sugimoto (nickname: Kameichi)
Age: 140 years old (Born in 1880)
Personality: Gentle and honest. Very serious and thoughtful, low-key and quiet, with much potential.
Other information: Somebody once said he lives quietly on the Sugimoto campus but in fact, his home is the open space in front of the Building #1. His father’s name is Kameatsu Sugimoto. Kameichi respects his father and has been studying under him very hard. Kameatsu’s teacher is said to be Tomoatsu Godai.

Osaka City University celebrates its 140th anniversary in 2020. With students’ desire to contribute to the university, they started to create an official Mascot on the Sugimoto Campus. To understand what image showed the “uniqueness of OCU”, the group gave a questionnaire to students and graduates. Surveys were not only conducted online; the group talked to and interviewed students on campus. 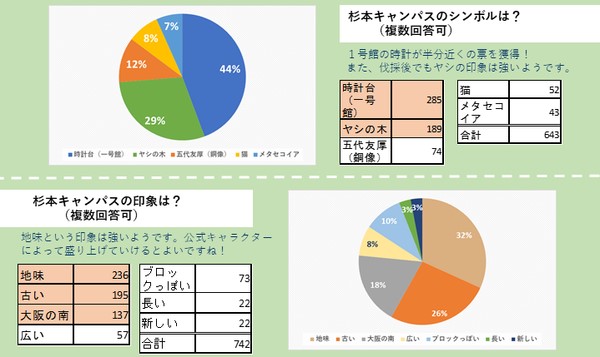 Mr. Mitsuru Kadota, graduate of the Faculty of Human Life Science was asked to design the mascot. "Ichi" in Kameichi comes from "Ichidai", the Japanese abbreviation of OCU.

We wanted to do something as OCU students! We wanted to do something for our alma mater, as this is a memorable year for OCU! With this in mind, 10 of us gathered to undertake this project. Creating a character was sometimes fun but sometimes difficult. The process was such a precious and irreplaceable time. We are very pleased that the cute character was completed. We hope many people are friendly to Kameichi and love him as the OCU mascot. We hope to make university life happy with Kameichi especially during these difficult times.

We synthesized the responses from the on-campus questionnaire into an outline for a mascot. By adopting "turtle" as a motif suggested by the student team, I was able to give elements such as "old" and "sober" a positive expression as "historic" and "serious and strong". We hope that "Kameichi Sugimoto" will be accepted as a symbol of love for OCU, not only by current students but also everyone involved with OCU including alumni. May Kameichi convey its charm to society.