A research group led by Haruo Shintaku, a specially appointed professor of the Graduate School of Medicine, Osaka City University, overseeing a course endowed with disability and regenerative medicine, has safely completed phase I of an autologous umbilical cord blood treatment for hypoxic Ischemic Encephalopathy (HIE). Phase II※1 has started on November 12, 2020.

※1 Clinical research based on the Act on the Safety of Regenerative Medicine.

Severe asphyxia is a condition in which breathing and pulse are weakened when a baby is born. Perinatal hypoxic ischemic encephalopathy, which is the main cause, is a brain disorder that happens when there is a blockage of blood flow to the brain at birth, causing brain nerve cells to fall into hypoxia and hypoglycemia. It occurs at a rate of 1 to 6 out of every 1000 live births. Even with hypothermia therapy, which is considered to be an effective treatment for babies, half of them develop serious secondary complications, with the muscle rigidity and difficulty in exercising typical of cerebral palsy being a main one. 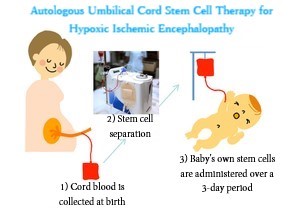 The 6 cases required for the Phase I study to verify safety have been confirmed, making it the first clinical research to confirm safety of the treatment. Next, to confirm the feasibility and effects of treatment, Phase II of clinical trials has started in November. Phase II requires 15 cases, which is more than double that of Phase I. It has started in 9 facilities※2, with plans to increase the number to 18.

In the phase II of this study, we have asked StemCell Institute Inc., a private cord blood bank, to aid facilities that do not have an umbilical cord blood stem cell separator, by receiving shipments of cord blood and preparing them for use in autologous umbilical cord stem cell therapy. If this is successful, more hospitals will be able to carry out this treatment.