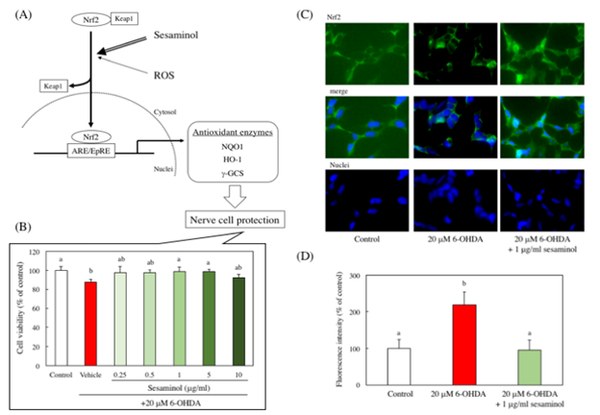 *Description of image below*

Sesame seed oil, used by many for its nutty aroma and high burn-point, is made by extracting the fatty oils from sesame seeds, with the empty shells thrown out as waste. In a literal instantiation of the age-old adage “one man’s trash is another man’s treasure”, researchers discovered that a chemical called sesaminol, abundant in this waste, has protective effects against Parkinson’s disease.

Parkinson’s disease is caused when certain neurons in the brain involved with movement break down or die due in part to a situation called oxidative stress - neurons in the brain come under extreme pressure from an imbalance between antioxidants and reactive oxygen species (ROS). The team found in cell-based in vitro experiments that sesaminol protected against neuronal damage by promoting the translocation of Nrf2, a protein involved in the response to oxidative stress, and by reducing the production of intracellular ROS.

In vivo experiments brought Associate Professor Kojima-Yuasa’s team equally promising results. The impairment of movement due to Parkinson’s disease is the result of damaged neurons producing less dopamine than is naturally needed. The team showed that mice with Parkinson’s disease models show this lack of dopamine production. However, after feeding the mice a diet containing sesaminol for 36 days, the research team saw an increase in dopamine levels.  Alongside this, a rotarod performance test revealed a significant increase in motor performance and intestinal motor function.

With the first-ever medicine for Parkinson’s disease potentially being the naturally occurring food ingredient sesaminol, and this ingredient being found in the naturally occurring waste of the sesame seed industry, Associate Professor Kojima-Yuasa and her team are ready to take their work to the clinical trial phase and connect the consumption/production chain in a way that, as she puts it, “prevents diseases with natural foods to greatly promote societal health.”

This work was supported by JSPS KAKENHI, Grant Number, JP15K00832.

(A)   The neuroprotection by sesaminol.

(B)  Effects of sesaminol and 6-OHDA on the viability of SH-SY5Y cells.

SH-SY5Y cells were incubated with 0.25~10 μg/ml of sesaminol for 2 h, followed by treatment with 20 μM 6-OHDA for 24 h. The cell viability was measured using the MTT assay. The results represent the means ± SD of 6 experiments. Values without a common letter are significantly different (p<0.01).

(C)  Effects of 6-OHDA and sesaminol on nuclear translocation of Nrf2.

SH-SY5Y cells were incubated with 1 μg/ml of sesaminol for 2 h, followed by treatment with 20  μM 6-OHDA for 3 h. Intracellular Nrf2 was stained using primary and secondary antibodies and nuclei were stained using DAPI.

(D) Effects of 6-OHDA and sesaminol on intracellular ROS levels.

SH-SY5Y cells were incubated with 1 μg/ml of sesaminol for 2 h, followed by treatment with 20 μM 6-OHDA for 6 h. Intracellular ROS levels were measured using DCFH-DA. The fluorescence intensity of intracellular ROS. The results represent the means ± SD of 10 cells. Values without a common letter are significantly different (p<0.05).