In the 2020 April 21 issue of Journal of Hepatology(https://doi.org/10.1016/j.jhep.2020.03.051), a research group from the Department of Hepatology in Osaka City University Graduate School of Medicine, Japan reported that a new insight into the pathophysiology of human nonalcoholic steatohepatitis (NASH) with fibrosis and suggested a possibility of the new therapy using cytoglobin (CYGB) inducer for clinical application. 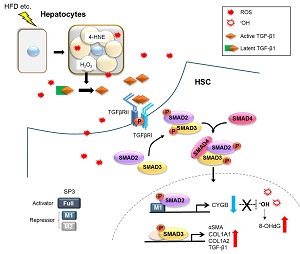 When the liver is damaged, hepatic stellate cells (HSCs), one of the liver constituent cells, are activated and collagen production is accelerated. If the cause is not eliminated, it progresses to cirrhosis, which causes scarring of tissues and markedly reduces liver function.

Moreover, severe hepatic fibrosis and hepatocellular carcinoma are estimated to cause 3.5% of all deaths worldwide, indicating a need for new anti-fibrotic therapies based on a detailed mechanistic understanding of liver diseases.

Therefore, activated HSCs have recently been focused on as a target cell for anti-fibrotic therapy and research on HSC is being actively worked worldwide.

It is widely accepted that transforming growth factor beta (TGF-β), is a cytokine, triggers strongly fibrogenic response through activation of HSCs.

CYGB is a mammalian globin, which is discovered by researchers and uniquely expresses in HSCs in the liver. Previously, researchers have reported that CYGB suppresses liver damage caused by oxidative stress and is expected to has a protective effect on hepatic parenchymal cells.

This study shows that the molecular regulatory mechanism of TGF-β-induced downregulation of CYGB in human HSCs, leading to the loss of cellular tolerance to exogenous oxidative stress and oxidative DNA damage in activated HSCs in human NASH with advanced fibrosis. Moreover, researchers revealed the new function of CYGB for the first time that CYGB can inhibit oxidative DNA damage by scavenging hydroxyl radicals.