Osaka City University discovers that in the brain, the subiculum helps route navigation-associated information received from the hippocampus to downstream areas. 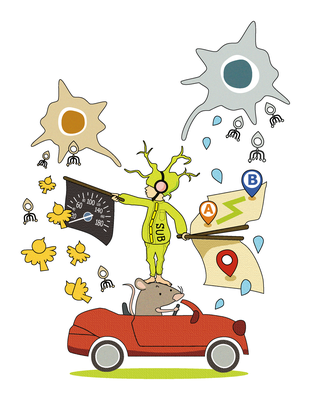 The subiculum in the rat brain is routing three types of spatial information.

Researchers reveal the path of information received by the hippocampus. Using optogenetics during large-scale recordings of rat subiculum, they discovered that the subiculum distributes information from the hippocampus to 4 downstream regions of the brain. They observed that the theta and sharp-wave/ripples in the subiculum controlled information transmission with millisecond precision according to the target region. This provides the foundation for a comprehensive understanding of the hippocampal memory system.

The hippocampus is the part of the brain that deals with information associated with spatial navigation and memory. For example, you are driving and despite the changing environment of different cars going at varying speeds, on and off ramps, distracting billboards, etc., you adjust your speed, glance only momentarily at the billboards, and navigate the roads in a smooth and timely manner. This is your hippocampus at work. It takes the input – a continuously changing environment – and helps turn it into the output – using memory of a road map to safely navigate your way. However, little is known about how information is distributed from the hippocampus to other brain regions that results in the output behaviour.

A research team led by Lecturer Takuma Kitanishi and Professor Kenji Mizuseki of the Department of Physiology, OCU Graduate School of Medicine have clarified for the first time that spatial information received from the hippocampus is further directed downstream by a region of the brain called the subiculum.

“The hippocampus processes information we are all familiar with in our daily life – from our commute to work to going to see grandma”, says Kitanishi, “however, commonly used methods of measuring brain activity have not allowed us to know to which brain region the hippocampus transmits information.”

The team devised a method to track this inter-regional flow of neuronal activity. Combining large-scale neuronal activity recording and multi-site optical stimulation, they measured the brain activity of free-moving rats. What they found was that while the hippocampus received and transmitted a wide range of information, the subiculum routed the information inherited from the hippocampus in a noise-resistant manner.  Think of the subiculum as the sorting office of your local hippocampal postal service.

“We found that information on "speed" and "trajectory" was selectively transmitted to the retrosplenial cortex and nucleus accumbens regions of the brain, respectively, while information on "place" was equally distributed among four regions: the nucleus accumbens, anteroventral thalamus, mammillary body, and retrosplenial cortex”, states Kenji Mizueki.

The team also observed that the theta brain waves and sharp-wave/ripples emitted from the subiculum controlled the timing of information transmission depending on which region of the brain the subicular neurons targeted and the timing was precisely managed down to the millisecond. This could help explain the selective nature of the subiculum and why your awareness of the changing environment and continuous updates to your driving all happen at the same time.

The team plans to use their new method of tracking neuronal activity on a wider scale. “Next, we will include hippocampal information generated by peripheral sensory inputs”, states Kitanishi. Using this research as a basis for a comprehensive understanding of the hippocampal memory system, “We even hope to shed light on disorders associated with hippocampal malfunction such as dementia.”