*1 Topological defect: A region of concentrated local energy left behind by the spatially inhomogeneous growth of a field describing spontaneous symmetry breaking during a phase transition. In particle theory, the Higgs field is known as an example of such a field.

Hiromitsu Takeuchi, a lecturer at the Graduate School of Science, Osaka City University, and a researcher at the Nambu Yoichiro Institute of Theoretical and Experimental Physics (NITEP), has theoretically identified the nature of a mysterious topological defect produced by the recently discovered non-equilibrium time evolution of spontaneous symmetry breaking (SSB). Since the SSB realized in this system is like the SSB that has been known to occur in isotropic superconductors and superfluid 4He, it was expected to produce topological defects with vortex-like properties in the fluid, called quantum vortices. However, the topological defect observed in this experiment has a structure that bore little resemblance to the previously mentioned SSB, and its physical properties have been shrouded in mystery. In this research, the idea of applying the Joukowski transform, which is used to calculate the lift of airplane wings, to quantum vortices was introduced for the first time, and the analysis revealed that the most stable state of this mysterious topological defect is a new topological defect called a quantum elliptic vortex. The results of this research were published online in Physical Review Letters, considered to be one of the most prestigious journals in the field of physics.

A time- and space-dependent function called a "field" is commonly used to describe the properties of physical systems in which SSB occurs. If the motion of the field can be calculated, the behavior of the system can be predicted. However, the calculation is generally difficult because the degrees of freedom of the field are infinite.

This situation is similar to how the future change in wind direction can be predicted to some extent by looking at the path of the eye of a typhoon. In materials where SSB typically occurs, such as superconductors and superfluids, this "wind" corresponds to current without resistance and flow without friction, respectively. Since the structure of the field around the core can be predicted according to the symmetry breaking, it has been thought that the behavior of topological defects, and hence the behavior of the field, can be understood if the symmetry breaking is understood on a global scale. 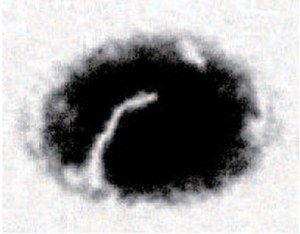 Figure 1: Composite defect in a 23Na superfluid confined in a pancake-shaped two-dimensional "electromagnetic container". The blacker color indicates a region of high fluid density. The core of the topological defect corresponds to the white region in the center of the picture. Photo from Phys. Rev. Lett. 122, 095301 (2019).

A phenomenon that refutes this idea was recently observed by Professor Shin's experimental group at Seoul National University [Phys. Rev. Lett. 122, 095301 (2019)]. Since the symmetry breaking in this experimental system is similar to that in well-known ordinary superconductors and superfluids, the shape of the core of the topological defect, called a quantum vortex, is expected to be round like the eye of a typhoon in a two-dimensional cross section.

In this study, to clarify the physical properties of the composite defect observed in the experiment, Hiromitsu Takeuchi introduced the idea of applying the Joukowski transform, which is used to calculate the lift of an airplane wing, to the quantum vortex. Based on this idea, the topological defect observed in the experiment is eventually stabilized as a new topological defect called a quantum elliptic vortex. Ordinary quantum vortices have a rotationally symmetric flow in their cross-section, like an eye of a typhoon (Fig. 2, left). However, the cross section of the newly proposed quantum elliptic vortex spontaneously breaks the rotational symmetry and forms a flow along the ellipse. It was previously thought that the external shape of a topological defect was determined based on the way the global SSB of the physical system occurs, but this result clearly overturns that perception.

It is theoretically known that such a strange structure occurs near the critical point of the phase transition, and that the local SSB inside the core of the topological defect is deeply involved in its stability.

Although SSB has been studied for a long time, there is no general understanding of how the local SSB inside the core occurs and how it affects the physical properties of topological defects. Topological defects appear not only in special materials such as superconductors, but also in a variety of physical systems ranging from relatively familiar materials such as crystals and liquid crystals to cutting-edge science and technology such as spintronics, and they are considered to play important roles in a rotating neutron star and the phase transition dynamics in the early universe. There is hope that new developments in SSBs, such as Takeuchi’s discovery, will be brought about by improvements in experimental techniques and corresponding advances in theory, and that they will have a ripple effect on the entire field of physics. 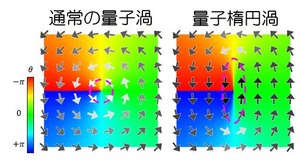 Figure 2: Flow (numerical calculation) around an ordinary rotationally symmetric quantum vortex (left) and a quantum elliptic vortex (right). The arrows indicate the direction of the flow; the whiter the color, the stronger the flow. The outline of the core is outlined by dashed lines. The background color represents the phase θ of the macroscopic wave function (complex function) corresponding to the superfluid field.

This research was supported in part by the "Osaka City Hometown Donation (City University Promotion)".