On Thursday, December 23, 2021, at an official ceremony at Abeno Medix, an agreement on the comprehensive mutual cooperation was signed by University Public Corporation Osaka and Osaka City and the University Co-ops of Osaka City University and Osaka Prefecture University.

The University Co-op and Osaka City University and Osaka Prefecture University have been closely cooperating with each other, building various relationships, including the operation of welfare facilities and support activities for students.

In preparation of the April 2022 opening of Osaka Metropolitan University, the two universities decided to sign this agreement to reconfirm their respective roles and to further strengthen their cooperative relationship in the future.

The signing ceremony was preceded by an exchange of opinions between the presidents of the two co-ops and the president of University Public Corporation Osaka, where concrete examples were given to confirm that the cooperative relationship will be further strengthened under this agreement.

The cooperation between University Public Corporation Osaka, the new university, and the new cooperative is expected to improve services even further. 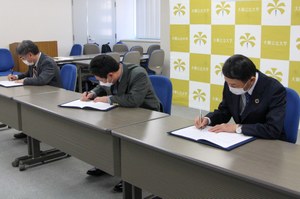 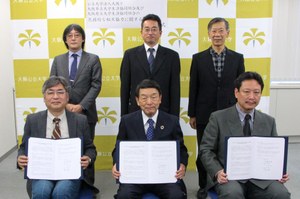