Kajita Corporation, which donated a large amount of money for the development of OCU in January 2020. (Head office: Chuo-ku, Osaka; President: Mr. Yatsuhiko Kajita, graduated from Faculty of Engineering in 1980), was awarded the Medal with Blue Ribbon by the Japanese government in December 2020. In response to this, a conferment ceremony where President Arakawa also presented the President's Certificate of Appreciation was held at the Sugimoto Campus on Thursday, July 29, 2021. 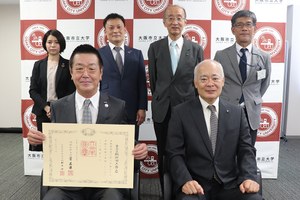 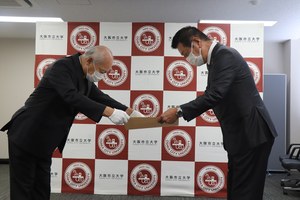 The President's Certificate of Appreciation

The donation was used for the construction of the 140th anniversary exhibition room and the all-weather grounds as a part of the OCU Dream Fund (Yume-kikin).

※The Medal with Blue Ribbon is awarded to those who donate a large amount of private funds for the public good. If the donor is a group or corporation, a letter of commendation with a blue ribbon is awarded.