Professor Emeritus Yoshikazu Nishikawa of Osaka City University's Graduate School of Human Life Science (at the time of the research) (currently a specially appointed professor at Tezukayamagakuin University), Research Associate Tomomi Komura of the Graduate School of Human Life and Environmental Sciences, Nara Women's University (at the time of the research) (also a visiting researcher at Osaka City University, currently a Research Associate at the University of Hyogo's Faculty of Environment and Humanity), Associate Professor Mikihiro Yamanaka of the Faculty of Agriculture, Tokai University, Associate Professor Koji Nishimura of the Faculty of Life and Environmental Sciences, Shimane University, and Dr. Keita Hara of Air Water Inc., using C. elegans, which is often used as a model animal in aging research, have found that a substance that emits a specific fluorescence in vivo increases with age. The fluorescence is derived from advanced glycation end products (AGEs) and correlates with the life expectancy of C. elegans. The measurement technology of this model is expected to be utilized for the search and evaluation of anti-glycation materials in the future.

The results of this research were published in the international academic journal npj Aging and Mechanisms of Disease on Monday, June 7, 2021. 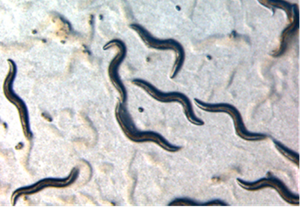 Background of the research

This research group hypothesized that AGEs could be indirectly assessed by measuring the fluorescence of some AGEs, and succeeded in clarifying the relationship between AGEs and fluorescence in vivo using the model organism Caenorhabditis elegans*2, and in developing a high-throughput*3 evaluation method.

*2 C. elegans (Fig. 1): a small worm with a body length of about 1 mm and a cell count of about 1,000. It has a variety of tissues including reproductive, digestive, nervous, and muscular systems. Since about 70% of human genes are also present in C. elegans, they are used in various research fields to understand human biological mechanisms.

*3 High-throughput: A method for finding useful things from a huge number of samples quickly, efficiently, and at a low cost.

This suggests that the fluorescence at specific wavelengths emitted from the body of the worm reflects AGEs, and by measuring this fluorescence, the amount of AGEs in the body can be estimated, suggesting the possibility of using it as an indicator of aging. 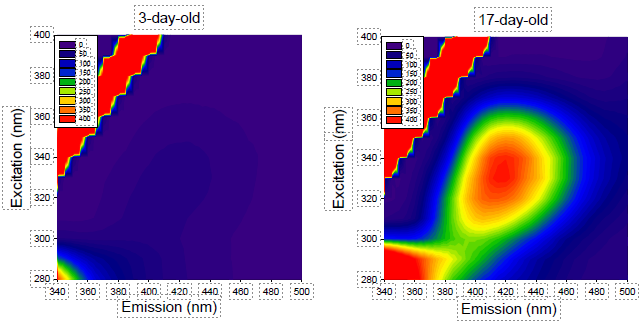 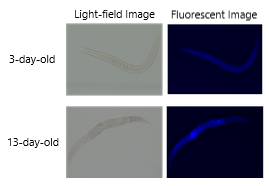 Since the body of C. elegans is transparent, the fluorescence intensity inside the body can be observed while the animal is still alive and they have a life span of about three weeks. In the future, the method laid out in this research is expected to be utilized on C. elegans to search for food materials related to anti-glycation and anti-aging.