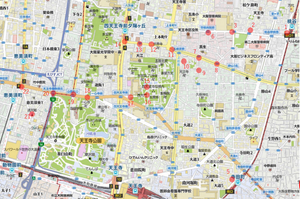 Route of the day

On Tuesday, July 13, 2021, Professor Hiroshi Niki of the Graduate School of Literature and Human Sciences, together with three students majoring in Japanese history, conducted fieldwork from JR Momoya Station to the vicinity of Osaka Metro Ebisucho Station, visiting historical sites and cultural assets in Osaka that are not well known to the general public. While experiencing the history from ancient times to modern times, they felt the history that still remains to this day. 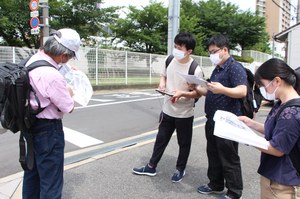 Intersection southeast of Yuhigaoka High School
This central road "Suzaku Avenue" that ran north-south from the ancient capital in Osaka called Naniwa-kyo to the ancient capital in Kyoto called Heian-kyo, remains intact today. Now the road continues for about 1km, but beyond that, the road is cut off due to urban remodeling in the Toyotomi era and modern land readjustment projects. 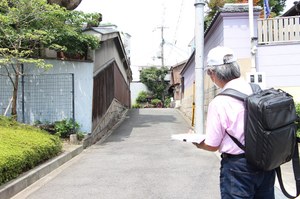 A pathway going up the east side of Shitennoji Temple
This place with stone walls and moats may have been built to prevent enemies from attacking from the east during the Sengoku or “Warring States” period. It is presumed that this step was used to set up facilities to protect the temple. 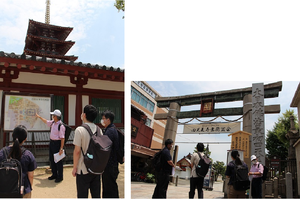 From the illustrated biography of the itinerant monk Ippen, we can see how Shitennoji was laid out in the Middle Ages. The main gate of Shitennoji Temple is also called the "East Gate of Western Paradise".

Professor Niki and his research group are planning to publish a book titled "A Historian's Guide to Osaka" (published by Bunri-Kaku) in early August. The book not only introduces major historical sites and cultural assets, but also provides a simulated experience of a historical tour of Osaka by experts. Professor Niki, one of the authors of the book, led the tour of the city in accordance with the book.