On Friday, 12 November 2021, at the Researchers Exchange Room of the Media Center, the Osaka City University Global Exchange Office in cooperation with Education Supporters Association, held a Guest Talk event with an OCU alumni. Many exchange students gathered at the venue as well as via Zoom and enthusiastically listened to their senior’s lecture. 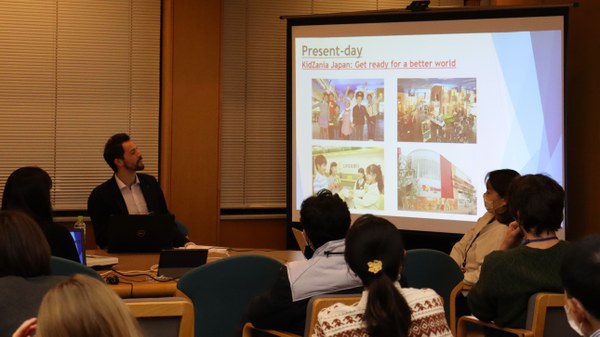 The speaker was Elliot Conti, with a speech themed: “Unconventional Ways to Build a Career in Japan”. Mr. Conti graduated from the Master Course of the Graduate School of Literature and Human Life Sciences in 2017, then he served as the general manager of non-profit organization Global Aichi and currently works as a senior manager of Kidzania Fukuoka. Mr. Elliot came to our university just in time for his business trip to the Kansai area. 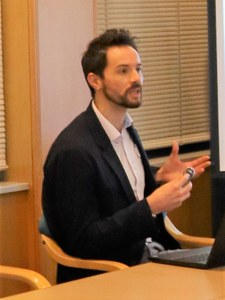 The event started with greetings from Professor Emeritus Satoru Kaneko, President of the Education Supporters Association, followed by short speech by the guest’s academic advisor, Professor Noriko Ijichi of the Faculty of Literature and Human Sciences, who made sure to include a rambunctious story about Mr. Conti.
Mr. Conti talked with humor about his life as a student at OCU, living in Osaka, Nagoya and Fukuoka, how he reached his current position. Including differences between Japanese and US working cultures, He spoke about career development in Japan where he pointed out an important moral “It’s not what you know, it’s who you know”. With interesting stories from his past, Mr. Conti explained in an easy-to-understand manner, that networking can happen with small opportunities even with a rather limited knowledge of the Japanese language and culture as an international student. He also shared practical information on Japanese-style job hunting and the skills desired by employers, which are often a “mystery” for exchange students.

Many of the students who participated agreed it was a valuable story and very helpful. What a successful event!

Events such as this one, that invites OCU alumnus actively involved in Japanese society are a new endeavor, and the Global Exchange Office is planning more in the future.