The summary of transglutaminases (TGMs) and various autoimmune diseases with autoantibodies to TGMs.

Sometimes research begins from the opposite end. To find the cause or symptom of a disease, it is common to study many affected patients to find a common denominator. This study, however, did the opposite. The researchers started with the protein transglutaminas 1 (TGM1), which belongs to a protein family with many known autoantigens. Autoantigens are the body’s own proteins that the immune system reacts against in autoimmune diseases. TGM1 is abundant in the skin. TGM1 has been previously linked to a hereditary skin disease and now the researchers wanted to know if TGM1 was also involved as an autoantigen in acquired skin diseases. They searched for it in patients with a wide range of autoimmune skin diseases. 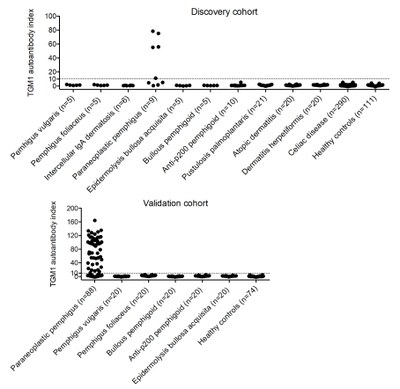 Eventually, they found a match. They saw that patients with the cancer-associated and severe blister-causing skin disease paraneoplastic pemphigus presented antibodies against TGM1. “We confirmed the findings in a larger group of patients and concluded that TGM1 antibodies were completely specific for paraneoplastic pemphigus,” says Takashi Hashimoto, Specially Appointed Professor of the Department of Dermatology, Osaka City University Graduate School of Medicine. The data collected from Professor Hashimoto helped the team, composed of researchers from Uppsala University and the Karolinska Institute, expand the study to include over 500 patients with various diseases.

Traditionally, research has focused on individual diseases to identify autoantigens. In this new study published in PNAS, the researchers took the opposite approach: they focused on the suspected autoantigen and then conducted a broad search for a matching disease. The study illustrates a new approach to identifying biomarkers. The researchers believe that this approach can be used in studies of all sorts of autoimmune diseases, and that this could be a way to leverage the growing amount of openly available data on gene expression and function.

“We believe that TGM1 antibodies can be valuable as a diagnostic marker in investigations of blister-forming diseases. Patients that test positive should be quickly investigated to eliminate the possibility of undiscovered cancers,” says Professor Hashimoto.

The study was conducted as a collaboration among Uppsala University, Karolinska Institutet and Osaka City University. The contributing researchers have applied for a patent for the diagnostic use of TGM1 antibodies.

Journal name: Proceedings of the National Academy of Sciences of the United States of America（PNAS)