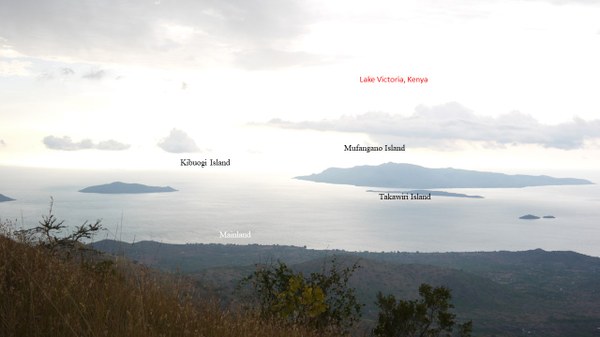 Malaria burden varies by locales in the study area. Parasite prevalence is higher along the mainland coast and Mfangano Island than on Kibuogi and Takawiri Islands.

Scientists are turning to genomics to better understand the epidemiology of malaria and to inform control and elimination interventions and strategies. In the Lake Victoria region of Kenya, malaria burden remains very high despite more than a decade of intense control activities. A team of researchers from Osaka City University, Nagasaki University, London School of Hygiene and Tropical Medicine, and Mount Kenya University generated whole Plasmodium falciparum genome sequences from the lake region. Their analyses revealed that malaria parasites from this region appear distinct from other parasites from East Africa, while frequencies of known drug resistance markers were similar to those in other East African parasite populations. Their findings will help to develop improved surveillance tools to determine parasite transmission routes and aid clinical disease management.

Since 2016, progress in reducing malaria-related incidence and deaths over the past decade has been slowing down. On top of this, restrictions put in place to contain the COVID-19 pandemic have further limited malaria control programs such as mass bed net distribution and indoor residual spraying campaigns. To regain the momentum toward malaria elimination, scientists have increasingly turned to malaria parasite genomics to get a better understanding of the epidemiology and transmission dynamics, and the genetic basis underlying drug resistance and disease severity.

“A comprehensive picture of a population of parasites requires an understanding of them on the individual genome level,” says Professor Akira Kaneko of the Department of Parasitology, Osaka City University Graduate School of Medicine. 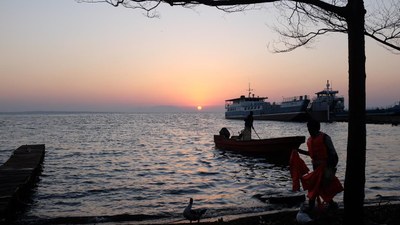 For the past decade, Professor Kaneko and his collaborators have conducted various studies on malaria in and around Lake Victoria, Kenya, where the disease burden is among the highest in the country, to find ways to eliminate malaria successfully. To gain more insights into the genomic diversity and population dynamics of Plasmodium falciparum, the deadliest malaria parasite in humans, Kaneko and his collaborators generated whole genome sequence data from 48 parasite isolates and compared them with parasites from other parts of Africa. They described their findings in the journal Scientific Reports.

Analyses based on single nucleotide polymorphisms (SNPs) or point mutations showed that P. falciparum parasites from Lake Victoria formed a distinct subpopulation within the larger East African parasite population, caused in part by the greater contribution of Central African parasites to the ancestral genomes of Lake Victoria parasites. Moreover, the team identified a number of SNPs that can potentially be used in a molecular surveillance tool to determine the main routes of transmission and migration of P. falciparum. “The population-specific SNPs we identified provide a high degree of small-scale specificity, typically to the country of origin, “states Professor Kaneko. “Combine these with the wider regional or continental view gained from population-specific organellar SNPs, and we could have the degree of resolution needed to generate an effective molecular surveillance tool.”

Another important piece to the picture were the drug resistance markers that the team observed circulating among P. falciparum isolates around Lake Victoria. They saw the persistence of the main resistance marker for the drug chloroquine, as well as high frequencies of mutations associated with sulfadoxine-pyrimethamine (SP) resistance. The team believed that the continued use of SP as intermittent preventative treatment by pregnant women (IPTp) is likely providing enough selective pressure to maintain these polymorphisms in P. falciparum. 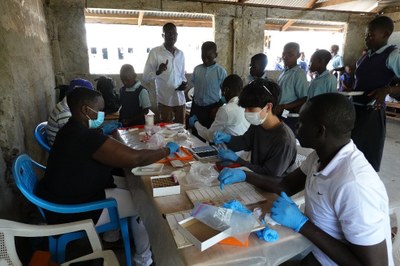 “We are especially excited about the potential application of the data we found regarding variations of P. falciparum and known drug resistance biomarkers we observed in parasite isolates from the area,” says Dr. Wataru Kagaya, Medical Lecturer of the Department of Parasitology, Osaka City University Graduate School of Medicine. One in particular stood out. They confirmed the presence of the S160N/T mutation in the gene Pfap2mu, which was first documented in Kenyan children with delayed parasite clearance when treated with artemisinin-based combination therapies (ACTs), currently the first-line treatment for uncomplicated malaria. “Our work is expected to assist in the clinical management and disease control through surveillance activities in regions with high malaria burden,” adds Kagaya.

Paper Title: Characterizing the genomic variation and population dynamics of Plasmodium falciparum malaria parasites in and around Lake Victoria, Kenya