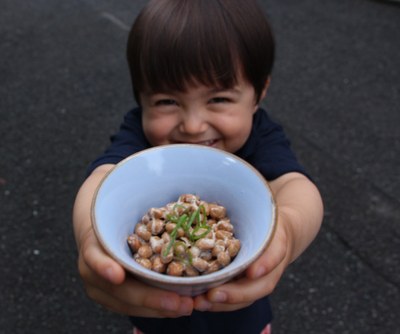 Researchers find that when the larva nematode C. elegans is fed a diet of Bacillus subtilis var. natto, a bacteria used to ferment soy beans into the traditional Japanese food natto, upon reaching adulthood these worms are able to survive infections from the gram-positive bacteria Staphylococcus aureus and Enterococcus faecalis longer than when fed a standard diet of non-pathogenic E. coli.

It’s sticky. It’s stinky. It’s good for you. Natto has been a Japanese staple for generations. But why has this dish made of fermented soybeans been gracing the tables in Japan for so long? While the answer may vary depending on who you ask, researchers have discovered their own compelling reason – natto may help in combatting certain bacterial infections, increasing overall longevity of those who eat it.

A research group led by Professor Eriko Kage-Nakadai from Osaka City University fed the larva of Caenorhabditis elegans, a small worm, a diet that included the bacteria used to make natto - Bacillus subtilis var. natto. When the worms reached adulthood, they were infected with two kinds of gram-positive bacteria, Staphylococcus aureus and Enterococcus faecalis, and in both cases the B. subtilis (natto)-fed worms survived longer than the control group. Their results were published in the Journal of Applied Microbiology.

“The probiotic B. subtilis has been shown to successfully eradicate the pathogen S. aureus in humans”, states Rina Katayama, lead author of the study, “so we were curious if the variation of B. subtilis found in natto also had a similar effect with S. aureus as well as other gram-positive bacteria.” The team also tested the worms with other strains of B. subtilis and, “we found that while they also increased host survival, the natto variation conferred the longest survival time,” states Prof. Nakadai.

While this is great news for cultures with a history of consuming natto and for those interesting in joining in, there are some things to note. The team fed a batch of worms with the natto probiotic after they had reached adulthood and found no effect on preventing or alleviating bacterial infections, suggesting there are critical stages in development that are particularly beneficial to consume B. subtilis (natto).

Also, the team tested the probiotic against the gram-negative bacteria Salmonella enterica and did not find any positive effect on host survival, suggesting B. subtilis (natto) is not a panacea for all bacterial infection, but selects against specific ones.

“While there is still much to explore and understand regarding the effect the bacteria has on humans,” states Katayama, “to the best of our knowledge, this is the first study to show that B. subtilis (natto) confers specific resistance against gram-positive bacteria”.