Newly discovered two-cell color detection of the pineal organ in the lamprey may be an evolutionary ancestor to the single-cell system found in fish and reptiles. This could provide insight into how color detection is achieved in diverse animals and how to help correct for human color blindness 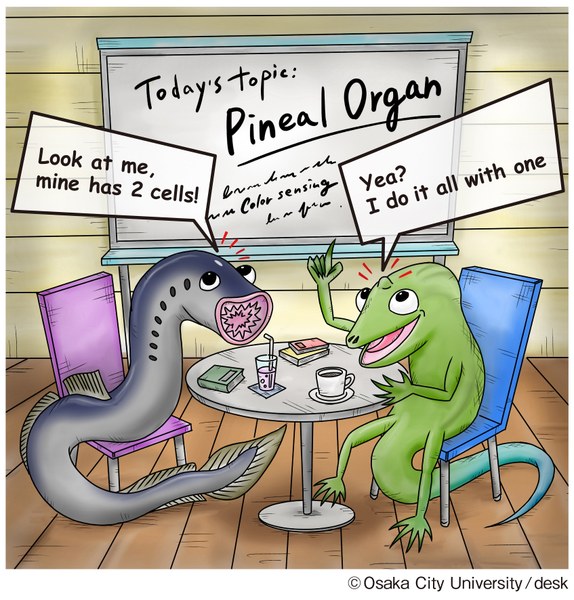 Excited by recent research, Iguana and Lamprey decide to get together and talk about their unique pineal organs

Using the lamprey, researchers from Japan analyzed the photosensory mechanism of the pineal organ, also called the pineal gland, in non-mammalian vertebrates and discovered a novel mechanism of pineal color discrimination (two-cell system) in which two types of photoreceptor cells, each containing two different opsins, are used to detect color. This discovery may provide insight into the evolution of color detection in other animals, including color vision in humans.

Most non-mammalian vertebrates have a color detection system in the pineal organ of the brain that is located in a single cell. In collaboration with Nara Women’s University, a new study from the Department of Biology and Geosciences, Osaka City University Graduate School of Science has discovered a two-cell system in the lamprey, a jawless fish that retains many primitive features among vertebrates. The research group proposed that single-cell color detection in most fish and reptiles evolved from a two-cell system.

The research group has previously shown that, unlike the lamprey, the pineal organ of fish and reptiles detects color through two types of light-sensitive proteins called opsins located in a single cell. This new study led by Professor Akihisa Terakita, found that the UV-sensitive parapinopsin and green-sensitive parietopsin that are present in a single photoreceptor cell of fish and reptiles, are expressed in separate cells of the lamprey.

Their findings were published in BMC Biology.

“In addition to eyes, fish and reptiles use a “third eye” called the pineal organ, or the pineal gland, to detect color,” states Professor Mitsumasa Koyanagi. “Based on these new results, we propose a surprising scenario where the color detection mechanism of the pineal organ, which was divided into two cells, was integrated into a single cell during evolution.”

In the study, the team analyzed the pineal color detection system of the lamprey and compared it with the single-cell systems found in fish and reptiles. Through DNA sequencing, they identified a set of genes in the lamprey that encode two opsins found in the single-cell system. To their surprise, analysis of the protein gene expression found that these opsins were expressed in separate cells. “This suggests that the pineal organ of the lamprey is not a one-cell system, but a system in which two types of opsins are present in different photoreceptor cells,” states Dr. Seiji Wada.

From previous studies, the research team knew that the single-cell system produces a response of hyperpolarization when UV light is received and depolarization in response to visible light. Electrophysiological analysis of cellular responses showed that the lamprey two-cell system was also sensitive to UV and visible light in the same way.

“To further solidify our hypothesis that the two-cell system similar to what we found in the more primitive lamprey, could be the evolutionary ancestor of the single-cell system of fish and reptiles,” states Professor Akihisa Terakita, “we also needed to investigate the proteins involved in converting light information into cellular responses.”

Called Gt and Go, the team found through immunohistochemical analysis that these proteins, which they had confirmed in previous research on zebrafish are used by UV- and visible-light responsive cell in the single-cell system, are responsible for the same responses in the two-cell system.

In previous work, the team checked the photoreceptor responses for the single cell system under various intensities of artificial light to show it works well even in strong light conditions. To clarify a potential benefit for this evolutionary change, the team investigated neurotransmitters in the two cells, and found that the UV and visible light-sensitive cells use the same neurotransmitter to integrate each signal to the next cell for generating color information. “We believe that the integration process at the neurotransmitter level could deteriorate the signal-to-noise ratio under strong light conditions,” states Seiji Wada.

Of the many possibilities this discovery unfolds, the teams focused on its implications with the human eye. The eye, which is responsible for vision, and the pineal organ, which is responsible for functions other than vision, have the same origin. The idea that the pineal organ’s color detection system evolved from a multi-cellular to single-cell system, while the eye is thought to have evolved complex neural circuits to handle multiple cells, should facilitate our understanding of visual and non-visual functions. This evolutionary insight suggests that to address issues with color blindness, rather than being limited to reconstructing a complex multicellular system, combining it into a single-cell system may become an option in the future.

Paper Title: Insights into the evolutionary origin of the pineal color discrimination mechanism from the river lamprey