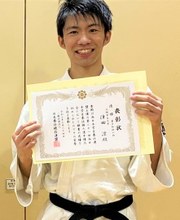 On Saturday, July 24, 2009, the 21st Western Japan Kempo Individual Championship was held at the Osaka University of Economics, and Rin Tsuda, a junior of the OCU Faculty of Economics, won the individual competition in the Shodan division. In this competition, students participated in the Kansai Championship as a crew of fourth-year and a third-year seniors and juniors. This allowed the juniors to receive continuous technical advice from their seniors in practice, which is believed to have improved their learning on how to fight in matches as well.

This Western Japan tournament was my first official tournament in a year and a half due to COVID-19. That's why the motivation for the tournament was so high within the team, and I'm happy that we were able to win. Thanks to the coaches and seniors who gave us individual guidance in practice, I think I was able to exceed my own ability even though it was my first game in a long time.

Now, I would like to pass on this experience to more juniors and contribute to the further development of the OCU Nippon Kempo Club. There will be many official tournaments in the fall, including the Western Japan Tournament for teams and the All-Japan Student Tournament, which is also the retirement tournament for our seniors. The entire Nippon Kempo Club will work together to culminate of our efforts as a team. Please continue to support us! 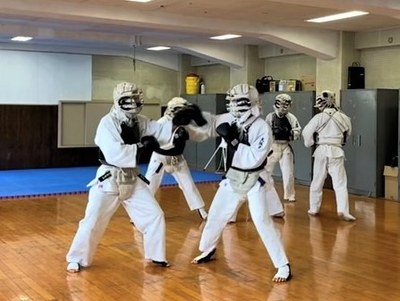 Rin Tsuda (in front) during practice