The 95th Kansai Student Swimming Championship Water Polo Competition was held at the Towa Pharmaceutical Ractab Dome and Maruzen Intec Osaka Pool from July 11 (Sunday) to August 13 (Friday), 2021. This year, due to the effects of the new coronavirus, the days of the competition were shortened, and instead of the usual league format, the tournament was changed to a tournament format, with the top five teams of the entire tournament becoming the first division.

The OCU swim team took 5th place in the water polo division, and was promoted to the first division for the first time in 20 years. The swimming club has a long history, having been founded in 1923, and the first water polo team was formed in 1935.

Mr. Eikichi Kasama (3rd year, Faculty of Business) was selected as one of the 13 best athletes from the first division universities.
※In the water polo competition, each team has 13 members: 7 players and 6 alternates. 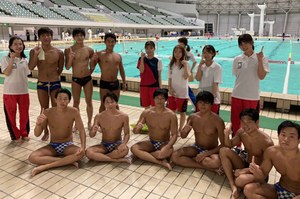 Members of the water polo team 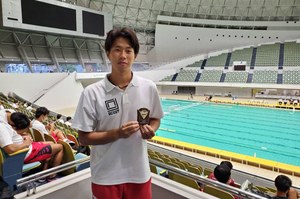 Eikichi Kasama, selected as one of the 13 best players

Comment by Mr. Moriyasu, head of the water polo team

We were recently promoted to the first division in the water polo competition at the 95th Kansai Student Swimming Championships in 2021. I believe that we were able to achieve this result not only because all the members hard work and training, but also because of daily support from parents and alumni, and the swimming team, with whom we work hard together. I would like to thank them all.

We will not be satisfied with this result, and will continue to work towards our goal of participating in the All-Japan Student Championships. 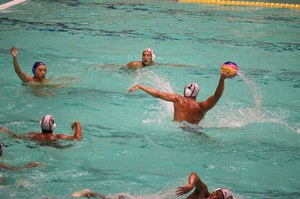 A Fielder handling the ball 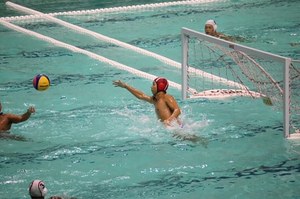 The Keeper going to block the ball