Osaka City University suggests a possible mechanism linking diabetes to Alzheimer’s disease in new discovery that amyloid-β in the blood comes from periphery organs like the pancreas and liver, not only the brain, and aids in blood glucose clearance by inhibiting insulin secretion.

A research group has revealed that amyloid-β (Aβ) detected in blood is secreted from peripheral tissues (pancreas, adipose tissue, skeletal muscle, liver, etc.) that are sensitive to glucose and insulin. Also, that Aβ secreted from peripheral tissues acts as a regulator on pancreatic β-cells to suppress insulin secretion. The results of this study indicate that blood Aβ levels fluctuate significantly with diet, and special care should be taken when using blood samples as a diagnostic marker for Alzheimer's disease, such as taking blood samples during fasting. 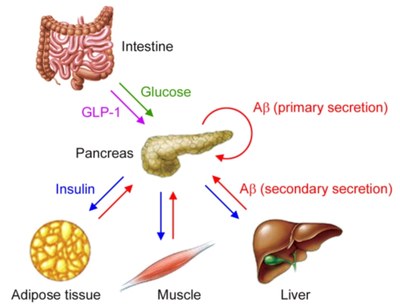 Researchers have identified amyloid beta (Aβ) detected in blood to originate from peripheral tissues, and that the peptide acts on pancreaticβ-cells to suppress insulin secretion, thereby regulating blood glucose levels. The study, which urges us to be careful when using blood Aβ levels as a diagnostic marker for Alzheimer’s disease (AD), was published in The Proceedings of the National Academy of Sciences (PNAS), the official journal of the National Academy of Sciences.

“This work was finally published after about 11 years,” says Professor Takami Tomiyama of the Department of Translational Neuroscience, Osaka City University Graduate School of Medicine. “It is not only an academic discovery, but also has implications in how we diagnose AD.”

Based on what is known, this study sought to explore some unknowns. First, as AD is caused by the accumulation of Aβ in the brain, it is thought that Aβ levels in the blood reflect the pathology in the brain and are currently used as a diagnostic marker. However, Aβ is generated from the amyloid precursor protein (APP) through the function of two enzymes, β- and γ-secretases, and this mechanism is expressed in many of the body’s peripheral tissues, not only in the brain, causing the origin of blood Aβ to remain unknown. Second, epidemiological studies have shown type 2 diabetes to be a strong risk factor for the development of AD, yet the mechanism linking these two diseases has eluded researchers as well.

“In our previous studies on mice injected with glucose,” Professor Tomiyama explains, “we showed a transient increase in glucose and insulin to peak at 15 minutes, but blood Aβ levels to peak some 30-120 minutes later.” In addition, previous studies have shown the oral administration of glucose to increase blood Aβ levels in patients with AD. These findings led the professor and his research team to explore the hypothesis that blood Aβ is secreted from peripheral tissues (pancreas, adipose tissue, skeletal muscle, liver, etc.) and it may contribute to the metabolism of glucose and insulin.

First, they examined the effects of glucose and insulin on blood Aβ levels of mice fasted for 16 hours. Collected blood samples from the tail vein at 0, 15, 30, 45, 60, 120, and 180 min intervals after the injection showed a transient increase in glucose, insulin, and Aβ, confirming previous studies.

Next, they explored the effect of Aβ on blood insulin levels by administering Aβ and glucose to fasted mice that cannot produce Aβ, called APP knock out mice. Measuring insulin in blood samples over time found that Aβ suppressed the glucose-stimulated rise in insulin.

Given that blood Aβ levels changed immediately upon introduction of glucose and insulin, the team focused on the mice pancreas, adipose tissue, skeletal muscle, liver, and kidneys to determine the origin of blood Aβ. They added glucose and insulin to isolated live peripheral tissues and measured the secreted Aβ. Results showed that Aβ was secreted from the pancreas upon glucose stimulation and from adipose tissue, skeletal muscle, and liver upon insulin stimulation. The kidneys, which is not involved in glucose or insulin metabolism, did not secrete Aβ upon either stimulus. They also found that when glucose and Aβ were added to pancreas tissue, levels of secreted insulin were suppressed.

Now that the origin of blood Aβ had been clarified, the team wanted to localize Aβ in the periphery tissues studied. “This would elucidate the cells involved with Aβ,” adds Professor Tomiyama. “In addition to providing further validation to our findings, this would give us a more detailed picture from which we could draw conclusions to possible mechanisms connecting type 2 diabetes and AD.”

Using immunohistochemistry to exploit the fact that antibodies bind to certain proteins, the team started with the pancreas tissue, detecting Aβonly in insulin (β cells). The team also found the β cells of mice with glucose injections to have less immunoreactions to Aβand insulin, suggesting during periods of fast, Aβ and insulin are stored in β cells and then released into circulation when stimulated with glucose. Similarly, tissue sections of each insulin-targeted organ were prepared and immunostained for Aβ and the bioactive substances specific to each tissue, called organokines. Aβ was found with the organokines of all the organ tissues tested, with less immunoreactions when stimulated with insulin.

“Our findings suggest that Aβ and organokines are stored during periods of fast and released into circulation when stimulated with insulin,” adds Prof. Tomiyama. “A comprehensive understanding of the organokine action of peripheral Aβ is something we hope to develop in future work.”

In addition to an explanation for the origin of Aβ in the blood, the research findings suggest a mechanism by which type 2 diabetes is a strong risk factor for the development of AD. In diabetes, Aβ levels in the blood are constantly elevated due to high levels of glucose and insulin. This inhibits Aβ to leave the brain to the periphery (transport through the blood-brain barrier and by body fluid flow through the brain parenchyma called the glymphatic system), causing Aβ to accumulate in the brain and develop into AD.

“Other more practical suggestions can be gleaned from this study,” concludes Prof. Tomiyama, “our data suggest that as blood Aβ levels fluctuate significantly with diet, special care should be taken when diagnosing AD with blood Aβ.”

Medical research grant from The Research Foundation for Dementia of Osaka

Journal name:  Proceedings of the National Academy of Sciences (PNAS)