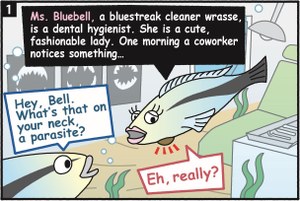 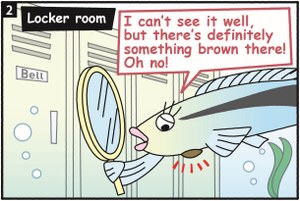 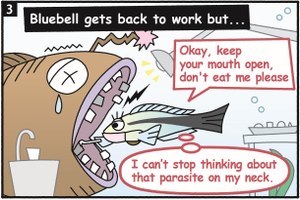 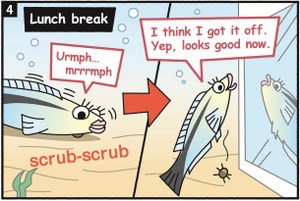 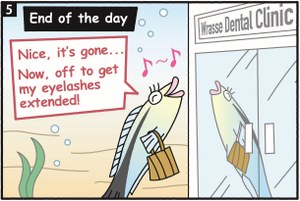 An international team of researchers respond to criticisms on previous work that demonstrated Mirror Self-Recognition (MSR) in the cleaner fish Labroides dimidiatus, by 1) successfully repeating the mark test with a larger sample size, 2) showing the MSR behaviour to be the visual result of the mark not a physical response to it, and 3) showing that MSR-trained fish do not show aggression to spatially varied mirror images of themselves. Additionally, they further demonstrate potential self-awareness in L. dimidiatus by showing that they do not demonstrate MSR behaviour when visually presented with the mark on other fish and solidify the importance of ecologically relevant marks presented in previous work by showing MSR behaviour of L. dimidiatus with brown marks, meant to resemble a main food source of the fish, as opposed to no such behaviour in fish with green or blue marks. 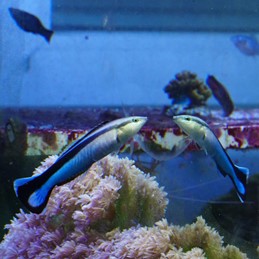 Mirror Self-Recognition (MSR) is seen as evidence for self-awareness and passing the mark test, in which animals touch or scrape a mark placed on their body in a location that can only be indirectly viewed in a mirror, is used to determine the capacity of an animal for MSR. Aside from chimpanzees, the evidence for other animals having passed the mark test has been criticized and thus inconclusive. By addressing criticisms placed against their previous work on the cleaner fish Labroides dimidiatus, an international team of researchers led by Masanori Kohda from the Graduate School of Science, Osaka City University, has provided further evidence to suggest the fish have the capacity for MSR.

This new experiment was recently published in PLOS Biology.

“Previously, using a brown marking on the throat area of L. dimidiatus, we had shown 3 out of 4 cleaner fish to scrape their throats several times after swimming in front of a mirror” (https://doi.org/10.1371/journal.pbio.3000021), states Professor Kohda, “a number on par with similar studies done on other animals like elephants, dolphins, and magpies.” However, one of the criticisms laid against this result was sample size and the need for repeated studies showing positive results. Teaming up with researchers from the Max Planck Institute of Animal Behaviour in Germany and the University of Neuchâtel in Switzerland, this study increased the sample size to 18 cleaner fish, with a 94% positive result of 17 of them demonstrating the same behaviour from the previous study.

But why a brown mark? “After looking at similar studies done on monkeys, pigs, dogs, cats, etc. that clearly tested negative, we wondered if the reason these animals didn’t attend to the mark was because it didn’t represent something in their natural environment they would be concerned about,” says Prof. Kohda. “In our previous study, we used a brown mark as it may look like a small parasite that is a main food source for L. dimidiatus.” A criticism in response to this was the possibility that the physical sensation of the mark, together with seeing the brown mark in the mirror, may trigger behaviour that doesn’t conclusively suggest MSR. To address this, the team tested how the fish would respond to a physical stimulus in their throat by injecting the brown mark 3mm deep (as opposed to 1mm). At such a depth the mark was hardly visible, yet they found that fish with the deeper injection scraped their throat at similar rates, whether a mirror was absent or present. To further solidify the importance of using marks that are ecologically relevant to the animals in MSR studies, the team found that no fish injected with green or blue marks demonstrated the scraping behaviour.

Lastly, some criticisms wondered if L. dimidiatus recognized the mirror image as itself and not another fish. A mirror-trained animal is one that is introduced to a mirror image of itself and goes through 3 steps. First it expresses some kind of aggressive behaviour as it likely perceives the mirror-image as another animal, then it shows unnatural, yet non-aggressive movement, as it confirms the mirror image is not another animal, and last it repeatedly looks at its own body with no aggression. At this point MSR is possible as it can now see the mark and try to scrape it off. “Our previous study demonstrated MSR in L. dimidiatus,” says Prof. Kohda, “however studies with other animals have shown that simply moving a mirror reignites aggressive behaviour suggesting the animal has only learned a spatial contingency, not MSR.” To address this, the team transferred mirror-trained cleaner fish to a tank with a mirror on one side of the tank and then 3 days later to a tank with a mirror on the other side and saw the fish show no aggression towards their mirror image in both tanks.

Also, to ensure the L. dimidiatus that passed the mark test truly are recognizing themselves, they placed mirror-trained fish in adjacent tanks that were separated by transparent glass. After 2-3 days when fish largely reduced their aggressive behaviour towards each other, they were marked the standard way the following night. None of the fish scraped their throat during the 120 mins of exposure to each other the following morning. “This result suggests that a visual ecologically relevant stimulus on another fish is not enough to induce throat scraping on marked subjects,” says Prof. Kohda. “We still have much work to be done, especially quantitatively, to show that fish, as well as other animals have the capacity for MSR, however as a result of this study we reiterate the conclusion of our previous study that either self-awareness in animals or the validity of the mirror test needs to be revised.”

Paper title: Further evidence for the capacity of mirror self-recognition in cleaner fish and the significance of ecologically relevant marks