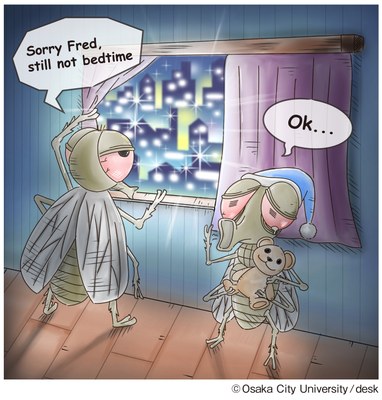 A collaboration between Osaka City University and Setsunan University sheds light on the effect urbanization has on the flesh fly species Sarcophaga similis. Through a series of laboratory and in-field experiments, scientists show that an increase in nighttime illumination and temperature, two of the major characteristics of urbanization, can postpone S. similis hibernation anywhere from 3 weeks to a month.

OSAKA, Japan - A new study shows how an increase in nighttime lighting (light pollution) and heat from urban areas disturbs the hibernation periods of insects.

“The study looks at a species of flesh fly called Sarcophaga similis, but the results could be applicable to any animal species that relies on predictable environmental signals for biological processes like growth, reproductive behavior, sleep, and migration”, said Assistant Professor Ayumu Mukai of Setsunan University and lead author of the study. In collaboration with Professor Shin Goto of Osaka City University, their findings were published in Royal Society Open Science.

A common way of exploring the ecological effects of urbanization is to investigate changes in life cycles of species in the urban and surrounding area. Urban warming and artificial light at night are two of the most influential factors in this regard. As urban warming can increase surface temperatures anywhere between 5 - 9°C, species with lower critical thermal optima, i.e. biological processes such as growth and development that occur at lower environmental temperatures, are disproportionately affected. Due to large fluctuations throughout the day and year, temperature can be an unreliable cue for species to determine when to sleep, breed, migrate, etc., rendering this cue supplemental to a biological response to seasonal changes by monitoring day length – an ability called photoperiodism. Increased nighttime light can throw off an insect’s photoperiodism, yet few studies have focused on the effect urban warming and artificial light at night have had on insects in their natural habitat.

“Recognizing the conditions urbanization brings upon insects where they actually live would be a great step forward in mitigating any negative effects”, Shin Goto said. To understand this, the team conducted experiments indoors and outdoors. As S. similis typically enters hibernation during autumn, laboratory hibernation was induced in flies under two average October temperatures (20°C and 15°C), with varying levels of illuminance to mimic bright urban to dark rural areas. They found that the percentage of flies entering hibernation decreased as illumination increased and as the temperature increased from 15°C to 20°C – suggesting the higher temperatures found in urban areas are associated with higher nighttime illumination.

In the field, the team measured when the insects entered hibernation in two city locations: a site with nighttime lighting at around 0.2 lux (the brightness of a full moon in a clear sky), and another with nighttime lighting at around 6 lux, which is equivalent to a residential area or street at night. At sites with dark nights, most flies enter hibernation between October and November while at sites with increased nighttime light, they did not enter hibernation until after November. The team also compared urban areas with illumination of about 0.2 lux with rural areas of almost 0 lux. The percentages of flies entering hibernation in rural areas increased from late September, around 3 weeks earlier than their urban counterparts. Temperatures were also 2.5°C higher in the cities, which is thought to be the cause for the delay in hibernation.

While these findings do suggest that nighttime lighting, which supports our daily lives, is disrupting the seasonality of insects, “urban environments are complex, with nighttime illumination and temperatures varying within the same neighborhood and between different cities”, Ayumu Mukai pointed out, “and our work on a single flesh fly does not elucidate the photoperiodic response of other insects.”

To understand the extent to which our cultural life influences other organisms, Shin Goto continued, “Future studies with a variety of insect species at different sites, in cities with different climatic regions would clarify what levels of light pollution and urban warming affect insect seasonal adaptation”