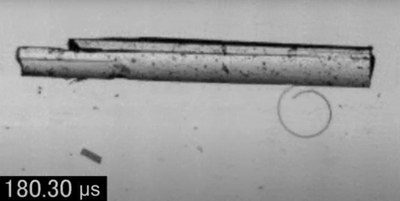 Researchers discovered, while exploring the photomechanical properties of diarylethene, that under irradiation with UV light the crystal of the compound peels off into micrometer sized crystals at a world’s fastest speed of 260 microseconds. As the material returns to its former molecular structure when exposed to visible light, the exfoliation method positions itself as a candidate for photoactuator manufacturing.

Look at any piece of machinery and you will see a complex network of moving parts, or actuators, each with its own function, all working together for a common goal. From this perspective, the way most machines differ is in the way their actuators are powered: excavators rely on compressed liquid (hydraulic), the brake system in a car uses compressed air (pneumatic), and a printer has electricity.

What if the moving parts of a machine could be powered by light? A machine made up of photoactuators would not need direct contact with the power source to move. Among its many possible functions, it could be accurately manipulated within places machines with electrical wiring or circuitry cannot – for example, the capillaries of the human body.

“The problem has been manipulating a material with light at the speed and size appropriate for photomechanical devices”, says graduate student Masato Tamaoki. He was part of a research group, led by Professor Seiya Kobatake of the Graduate School of Engineering, Osaka City University that, using UV light on crystals made of a compound called diarylethene, peeled off crystals the size of 2 – 4 micrometers at the speed of 260 microseconds, making it the world’s fastest exfoliation of a photomechanical material. Their results were published online in Crystal Growth & Design of the American Chemical Society on April 19, 2021.

“My lab has been exploring the photomechanical properties of diarylethene for many years now”, says Professor Kobatake. They found that under UV light, the molecules of the compound demonstrated behaviors such as expansion/contraction, bending, twisting and peeling. “There were only two examples of the peeling behavior, making it a very rare motion,” states Mr. Tamaoki, “we focused on this issue by experimenting with crystal size and photoirradiation conditions”.

They found that under the strain of UV light penetrating relatively all the diarylethene, it would change to a blue color and crack. However, if the light was focused on a vicinity of the crystal, peeling of the exposed section occurred at a surprising 260 microseconds. Comparing this to previously recorded measurements of 10s of seconds to 10s of minutes, “we are very pleased to have discovered the world's fastest, photoreversible exfoliation behavior, which is expected to become a new manufacturing method for photoactuator materials,” states Mr. Tamaoki.